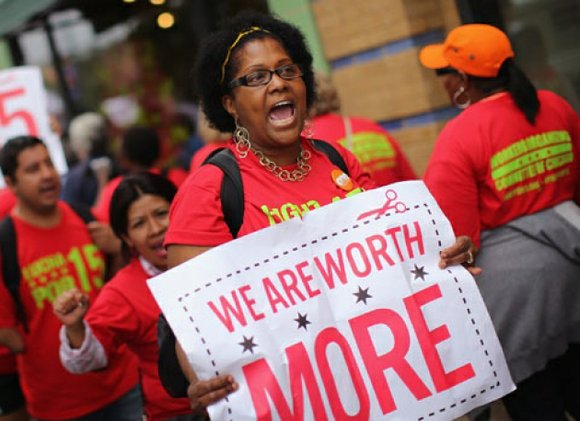 (NNPA) – Fast food workers won’t get the $15 living wage in time for Christmas, but their nationwide protests continue to draw attention to the growing chasm between the working poor and the super rich.

During an organized national day of action in early December, thousands of fast food workers went on strike in dozens of cities including Chicago, Boston, New York City, Los Angeles and Oakland.

It’s been more than four years since living wage advocates and low-wage workers won their last victory when the minimum wage was increased from $5.15 to $7.25.

According to a report on the minimum wage by the Economic Policy Institute, a Washington D.C. think tank, focused on low- and middle-income families: “The value of the minimum wage peaked in 1968 at $1.60, which is about $9.44 measured in today’s dollars; the current minimum wage of $7.25 is 23 percent less than it was in 1968 in real terms.”

Even though economic productivity grew more than 80 percent between 1973 and 2011, EPI reported that “real hourly compensation of the median worker grew by less than 11 percent.”

Economists have found that if the federal minimum wage had kept paced with inflation and productivity growth, that wage would have reached $25 per hour.

According to the Labor Department, by 2014, 21 states and Washington D.C. will have minimum wages that exceed the federal minimum wage.

In recent months, President Obama has also expressed his support for a higher minimum wage.

President Obama stepped up his vocal support for a higher federal minimum wage, during a recent speech in Southeast, Washington, D.C., one of the nation capital’s poorest neighborhoods. Obama said that he’s not surprised that Americans are frustrated with Washington, after the government shutdown and the rocky rollout of healthcare.gov, but that he knows that their frustration runs deeper.

“Their frustration is rooted in their own daily battles — to make ends meet, to pay for college, buy a home, save for retirement. It’s rooted in the nagging sense that no matter how hard they work, the deck is stacked against them,” said President Obama.

Obama continued: “The combined trends of increased inequality and decreasing mobility pose a fundamental threat to the American Dream, our way of life, and what we stand for around the globe. And it is not simply a moral claim that I’m making here. There are practical consequences to rising inequality and reduced mobility.”

Practical consequences that include workers increasingly dependent on the very safety net programs that many Republican lawmakers want to cut.

In a report, titled “Fast Food, Poverty Wages: The Public Cost of Low-Wage Jobs in the Fast-Food Industry “ sponsored by the University of California, Berkeley, Center for Labor Research and Education and the University of Illinois at Urbana-Champaign Department of Urban & Regional Planning researchers found that “more than half (52 percent) of the families of front-line fast-food workers are enrolled in one or more public programs, compared to 25 percent of the workforce as a whole.”