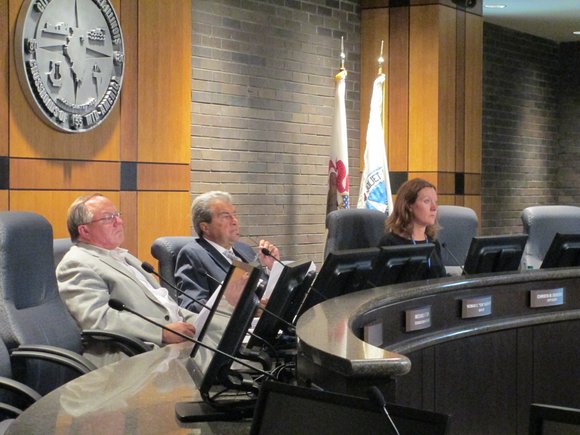 The Joliet Electoral Board, made up of At-large City Councilman Mike Turk, Mayor Tom Giarrante and City Clerk Christa Desiderio, met Monday for the first hearing in the council restructuring referendum challenge. Photo by Karen Sorensen

Attorney Ruth Greenwood, of Chicago Lawyers' Committee for Civil Rights Under Law, representing Concerned Citizens of Joliet, makes a point during Monday's meeting of the Joliet Electoral Board.

Joliet attorney Bryan Kopman addresses the Joliet Electoral Board in the first meeting on the challenge to the referendum petition to change Joliet's council structure.

Lawyers will go through each of the challenged council redistricting referendum signatures this week before making arguments as to whether there are enough to invalidate the Concerned Citizens of Joliet's effort to get the issue on the November election ballot.

The first meeting of the electoral board on the challenge, filed by Joliet resident Sarah Andreano, began Monday with Concerned Citizens attorney Ruth Greenwood requesting that Joliet Mayor Tom Giarrante and At-Large Councilman Mike Turk recuse themselves from the proceeding because of real and/or perceived conflicts of interest.

Both men stand to be affected by the change to an eight-district council because the three at-large seats -- one of which is currently held by Turk -- would be eliminated, Greenwood said.

Joliet City Attorney Jeff Plyman, representing the city's interests in the hearing, advised the men that he doesn't believe a conflict exists under his interpretation of the law. Municipal electoral boards are to consist of the mayor, the city clerk and the longest-serving council member, which would be Turk, according to the law.

"I've been on this council a long time and I've always attempted to do the right thing," Turk said. "I'm not going to put my reputation on the line for political gain. If the petition holds up, I'll support that, and if shows there are so many that are invalid ... I'll support that."

Giarrante did not address the recusal request.

Andreano submitted the objection to the Concerned Citizens petition, citing more than 300 signatures she believed were invalid for a variety of reasons, including the signer was not a registered voter, gave a bad address or had illegible handwriting.

At the outset, Concerned Citizens were advised by Greenwood that they would need a minimum of 1,500 signatures in order to get the council restructuring question on the Nov. 4 ballot. They collected more than 2,400.

What's not clear is whether 1,500 is the real "magic number." According to state law, it must be based on the number of registered Joliet voters who cast ballots in the November 2010 gubernatorial election.

The problem is that many of Joliet's precincts include both people who live inside the city and people who live outside of it. Will County Clerk Nancy Schultz Voots told Plyman she may not be able to provide an actual number without going through every single ballot cast to determine where the voter lived and if they voted for governor.

Greenwood suggested they follow municipal code instead, which calls for the number to be 10 percent of those Joliet residents who voted in the last mayoral election in 2011.

However, Kopman said he was not ready to give up on Voots being able to find a way to get an actual number of Joliet gubernatorial voters and wanted to continue the pursue the issue.

In the meantime, lawyers will sit down Wednesday and Thursday to go through the challenged signatures to determine which ones they agree are invalid and which they should isolate for the board's decision.

The board will reconvene on Aug. 27 to hear arguments from both sides.

Kopman also presented an amended petition challenge that cited more signatures they found to be invalid and apparently raises other points not addressed in the original objection document. It's not known whether any or all of the revised document can be considered because new information provided after the Aug. 11 challenge deadline is considered late and therefore inadmissible.

Plyman and Greenwood said they would review the amended document and provide their opinions at the Aug. 27 hearing.