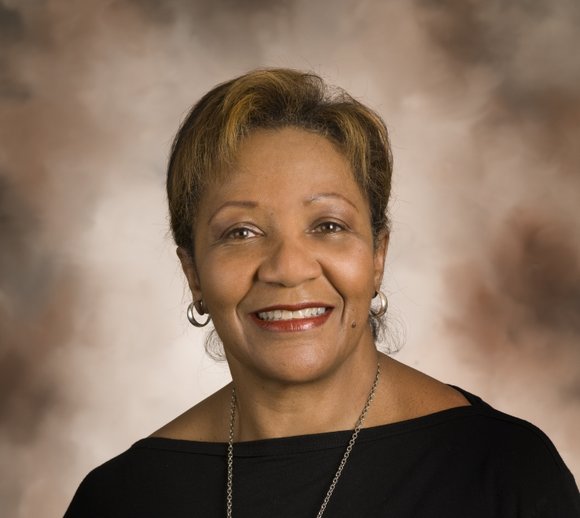 Community activist and Will County Board member Denise Winfrey is the recipient of the 2014 Marx Gibson Community Leadership Award, given jointly by the University of St. Francis (USF) and the Joliet Region Chamber of Commerce and Industry.

The award was presented Nov. 13 at the chamber’s Community Leadership School graduation dinner.

“Denise has provided her time and talent to many charitable organizations and to leadership positions on our Will County Board,” said USF President Arvid C. Johnson, who added that the Marx Gibson Community Leadership Award is very much in keeping with the university’s mission and Franciscan ideal of service through leadership.

“Denise is certainly a leader who can be found at the center of so many activities that have made a difference in the lives of individuals as well as our community as a whole,” Johnson added.

Winfrey is the 14th recipient of the award, given in the name of the late newspaperman Marx Gibson, who was dedicated to volunteerism and making a positive difference in the community, according to Russ Slinkard, CEO, Joliet Region Chamber of Commerce & Industry.

After receiving the award, Winfrey encouraged the Community Leadership School graduates not to fear failure. “Failure comes before success and not just in the dictionary, but in life,” she said. Winfrey also commented that “leaders continue to learn” throughout their lives and encouraged the graduates to commit to continually learn about people, their professions and their communities.

Winfrey, of Joliet, is a member of the Will County Board, representing District 8. She is chair of the Capital Improvements Committee. Under her leadership, this committee is responsible for purchase and renovation of the former Social Security Building, which will house the Coroner and Recorder of Deeds; upgrades to the sheriff's facility on Laraway Road; and purchase of the First Midwest Bank building to secure the footprint for the new County Judicial Complex. Under Denise’s leadership the face and function of Joliet, particularly the downtown, will be improved to better serve our citizens.