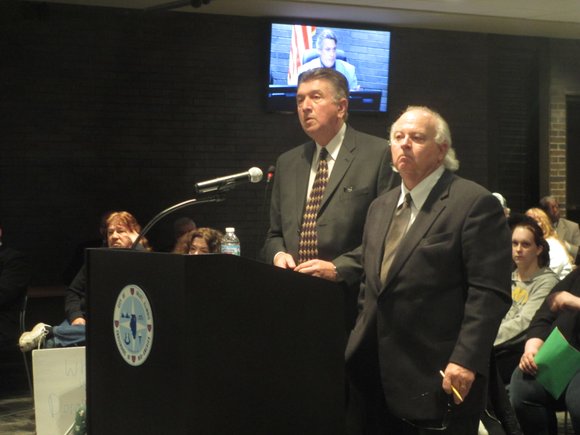 Randy Green (left), general manager of the Rialto Square Theatre, and Jim Smith, chairman of the Rialto's governing board, the Will County Metropolitan Exposition And Auditorium Authority, spoke to the Joliet City Council in mid-December about the new marquee proposed for the downtown Joliet theater. Photo by Karen Sorensen

Front view of the proposed new marquee for the Rialto Square Theatre in downtown Joliet.

Audience members opposed to the new sign proposed for the Rialto Square Theatre listen as General Manager Randy Green speaks about the marquee with the Joliet City Council Monday night.

Rialto Square Theatre officials followed the proper channels in getting city approval for a new marquee, but will open their Wednesday meeting to the public so residents can weigh in on their choice, they told the Joliet City Council Monday.

Whether that will result in any changes to the controversial sign, which is already being built in anticipation of a spring erection date, remains to be seen.

General Manager Randy Green said the issue will be "discussed thoroughly" at the 4 p.m. meeting of the Rialto's governing board, the Will County Metropolitan Exposition And Auditorium Authority, being held at the 102 N. Chicago St. venue.

But board chairman Jim Smith made it plain that he expected the board would be "steadfastly supporting" the sign they presented to local businessman Ed Czerkies, who is funding its construction.

"To put it mildly, (Czerkies) is very concerned and he's not pleased with the situation," Smith said.

The Rialto has been seeking someone to fund the new marquee for the last nine years, when it was included as part of the theater's $5 million fundraising campaign, Green said. Officials thought they had a deal in 2008, but the backer pulled out, he said.

This July, Czerkies agreed in July to pay the $350,000 cost, but requested the sign include a mention that it was in memory of his parents, Michael and Mary Czerkies.

With the deal in hand, Rialto officials won approval from the Joliet Historic Preservation Commission in September and the Zoning Board of Appeals in October, Green said. The sign was unveiled in November during the Rialto's Festival of Trees.

Public criticism was almost immediate, with questions raised about its size, its consistency with theater's architectural style and the appropriateness of including an "in memory of" notation. One resident alleges the city did not properly notify the public and has asked the state to investigate if the Open Meetings Act was violated.

At least two dozen opponents were in the audience of Monday's pre-council meeting, with several speaking in opposition to the sign.

Sherry Lewandowski said the sign was not only a drastic change to the theater's exterior, but would have an adverse effect in terms of being able to lure film producers to use the building in movies and couples to use it as a wedding venue.

"We are sure Mr. Czerkies' parents would have loved the thought (that their son wanted to honor them), but would they have loved the action?" Lewandowski asked.

Councilman Jan Quillman raised some of the same points, and questioned the size of the sign, which at its highest points will be about 12 feet. Green could not say how tall the current sign is other than it is shorter.

"If it's that high, to me, it's hiding some of the architecture of the building," Quillman said. "Why can't we make it look old but updated?"

She also asked whether some sort of compromise might be possible, such as creating a plaque or monument for Czerkies' parents rather than including their name on the marquee.

Green didn't answer that question but said he didn't think the memorial marred the sign in pictures because it could be easily removed using a computer program such as Photoshop.

Not all council members opposed the sign. Council member Mike Turk said the new marquee could be a boon to the city if the LED and video components attracted new patrons, as a similar sign by the same company did for the Morris Performing Arts Center in South Bend, Ind.

Council members Larry Hug and John Gerl broached the topic of the city withholding its annual $600,000 contribution to the Rialto if sign modifications were not been made -- as some residents are urging be done. Neither pushed the issue.

Green acknowledged that action would be "devastating" to their budget, which is only $4 million.