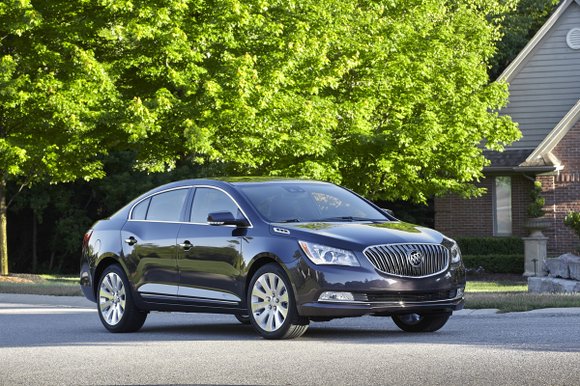 The LaCrosse was the first car that signaled Buick was serious about making a comeback in the U.S. market.

For 2014, the styling has been tweaked a bit with winged shaped LED accent lighting in the front and wrap around taillights with LED lights in the rear. The interior has been spiffed up with new seats, four-way adjustable headrests and the car has the latest technology like the next generation of IntelliLink that included smartphone connectivity and voice controls.

Buick said: “In addition to easily identifiable icons covering everything from navigation to phone to music apps such as Pandora, next-generation IntelliLink is designed to accommodate new features and enhancements and be highly customizable. It also features natural language voice recognition, which allows customers to safely place calls, enter destinations, browse media, play music and control other functions simply by telling the vehicle what to do.”

But what really set the LaCrosse apart from other midsize sedans is the ambiance of quality that is part of Buick’s heritage.

The car was spacious with plenty of head and legroom fore and aft. With a wheelbase of 111-inches, the LaCrosse was sizable for a midsize sedan but not so big as to be cumbersome on the road.

In effect, the car could be comfortable on long haul trips or in the aggravating stop and go mess of rush hour traffic. And that holds true for up four passengers.

Equipped with a 3.6-liter V6, the engine made 304 horsepower and 264 pound-feet of torque and moved the 2014 Buick LaCrosse down the pavement with authority on surface streets or the expressways here.

What Buick has branded as QuietTuning meant that gear shifts weren’t heard or felt. Contributing to the ambiance of the car was the near silence of the passenger cabin. Indeed, the Buick LaCrosse felt like what it is – a premium sedan.

One of the few quibbles with the car was that the ambient interior lighting could have been used a little more liberally and it could have been more pronounced (read brighter) in a subdued sort of way.

It snowed during the weeklong test drive but it wasn’t enough to really test the 2014 Buick LaCrosse’s all-wheel-drive system. Capable of sending 90 percent of the car’s torque to the rear wheels, the 2014 Buick Lacrosse is front-wheel-drive, for the most part, under normal driving conditions.

Still, the car handled well, avoided the potholes and the divots of winter worn streets here and the LaCrosse was really easy to drive with its electronic power steering.

The test vehicle was chock full of equipment.

Of course, the test model was equipped with OnStar which offers more services than will be listed here. But the live concierge in this day of automated and digitized voices is a person-to-person service that is becoming rare.

The car had two of what Buick called driver confidence packages. The first included forward collision alert, rear cross traffic alert and blind side warning alert. There was also a heads-up display and front fog lamps.

The second confidence package included adaptive cruise control, a sunroof with fixed second row skylight, navigation and select Bluetooth streaming. That means the audio system could play some of the apps on your smartphone including Pandora.

With a base price of $39,885, the 2014 Buick LaCrosse was reasonably priced. Add on $5K worth of options along with its $925 freight charge and at $46,670, the premium sedan was on the same tier as other quasi luxury brands and in some instances it was better.