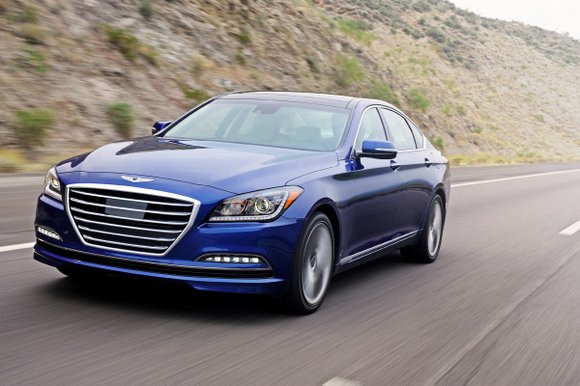 Nonetheless, Hyundai said that German luxury brands as well as Lexus and the newly resurgent Cadillac are the Genesis’ main competitors. In order to really compete with midsize offerings from other luxury automakers, the new sedan has to offer a bunch of comforts and engineering prowess.

First there was the look. The 2015 Hyundai Genesis had a single-frame hexagonal grille. In other words, the sedan had a distinct face, low hood and short rump. It looked very athletic.

It also took Hyundai’s fluidic design to the next level or 2.0 in Hyundai-speak. The lines were flowing, sharp creases were evident from stem to stern and they ended at the trunk with distinctive taillights and either dual or quad exhausts.

The interior featured a horizontal layout, which seemed spacious. Hyundai increased the wheelbase by three inches while increasing the overall length by less than a half inch. Thus the 2015 Genesis has more interior volume than any of its competitors, so said Hyundai.

Before we left to test drive the car in Detroit’s northwestern suburbs, we got in the back seats and found them to be comfortable, there was plenty of legroom, hip room and head room for two sizable men and this was with the model that was equipped with a panoramic roof. The front panel of the glass roof was movable while the rear section was fixed.

Our test model was outfitted with matte wood trim but maple and Ash are also available. The car featured French stitching, rear biased all-wheel-drive and the new Genesis has electric power steering.

Luxury is conveyed in the interior of any vehicle and Hyundai designers did a nice job of getting the message across in the 2015 Genesis. Fit and finish was good, the car was equipped with leather and some of the bright work was aluminum.

Our all-wheel-drive V6 had an EPA rating of 16 mpg in the city, 25 mpg on the highway and 19 mpg combined. This engine was quiet and pretty responsive but that was in sport-mode. The steering ratio would also stiffen in sport mode. The car was a lot more docile when we selected normal mode. There was also an Eco mode.

Handling, especially with the AWD rear biased system, was very good. However, the car didn’t drive as athletic as it looked. At almost 4,300 lbs., the Genesis’ really slick styling belied its heft. Thus, it was unwise to try and take long sweeping curves, and probably tight ones, too aggressively.

The 2015 Hyundai Genesis was chocked full of creature comforts. Adaptive cruise control capable of a full stop and then restarting as long as the vehicle it was following resumed speed in three second or less. If not, just touch on the gas pedal and that would resume cruise control at the previous setting.