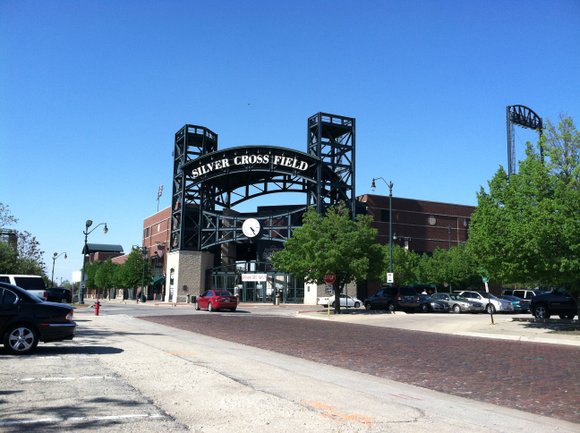 A long list of costly improvements needed at Silver Cross Field were laid out for the Joliet City Council Tuesday night, prompting one council member to question whether it was time for the city to get out of the baseball stadium-owning business.

City Manager Jim Hock outlined the immediate and future repairs needed at the 13-year-old ballpark, the leased home of the Joliet Slammers minor league baseball team. The price tag for most of the work is not yet known, he said.

“If we don’t address these (problems), they may create safety hazards and obviously affect the life of this important community asset,” Hock said, noting that the park has been “under-invested” for several years because of the city’s tight recessionary budget.

Among the most serious problems, Hock said, is a leak in the seam of a concrete beam beneath the concourse between home plate and first base. The resulting water leakage rusted out an electrical conduit that must now be replaced, but can only be accessed by removing part of the stadium seating, he said.

A structural engineer will need to be brought in to determine how it can be repaired, he said.

The city has already made unexpected expenditures at the park this year, including the purchase of two hot water coolers and the replacement of the wooden floor below the stadium’s beer cooler and freezer, Hock said. Because of condensation buildup, the floor warped and tore a hole in the metal freezer, he said.

Also needing to be replaced is the netting behind the backstop, which is so worn that it’s being held together with twist ties, Hock said. When the Slammers hold two concerts in the stadium in mid-August, the old net will come down and be replaced with a new one, he said.

And those are the emergency fixes. The city will also need to replace the field’s sod, to the tune of about $80,000, address the weatherization problems in the stadium offices, and do something about the scoreboard, which is so old that it runs on a Microsoft 5 program that cannot be repaired, Hock said.

The big question is whether the money the Slammers pay to lease the park -- $50,000 this year and $75,000 for the following two years – will be sufficient to cover the expenses.

But the bigger question for At-large Councilman Jim McFarland was whether it was not time for the city to try to find a new owner for the stadium.


“Is there any way we can look to see if the city can potentially sell the ball (park)?” McFarland asked. “Is there a way … to just put it out there, get it appraised and see if some private developer’s interested in purchasing it?”

Hock acknowledged the park could definitely be put on the market, but there might not be a lot of buyers vying to take it off their hands.

And there’s a philosophical question of whether it’s fair for the council to expect a baseball stadium to be self-sustaining or whether it should be subsidized because it is a public asset, he said. In Michigan, where Hock has worked previously and where municipalities are responsible for parks, it was a given that most public amenities would not bring in enough to break even or make a profit, he said.

“(Some communities say), ‘Yes, we want to provide these recreational opportunities, these cultural opportunities to our residents.’ But it is something (where you can also) decide to say, ‘Hey, it’s an asset that we don’t to operate anymore and maybe somebody can operate it better and make money on it.’”