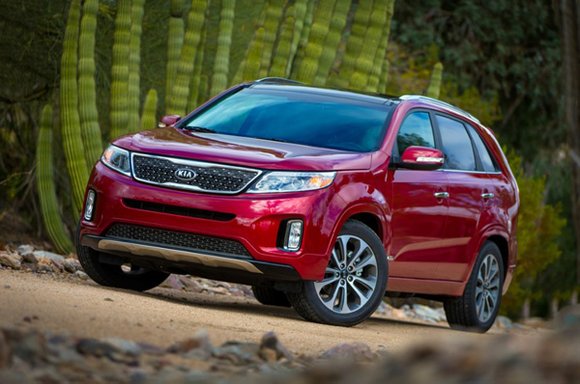 We ended a week-long test drive of the 2015 Kia Sorento SXL FWD think it was a pretty good crossover vehicle. The Sorento had a 3.3-liter direct injection V6 engine that made 290 horsepower and 252 pound-feet of torque. It was mated to a six-speed automatic suspension.

Getting around town was a breeze in Kia’s Sorento. Acceleration was pretty good, handling was really good. The crossover vehicle and its electric power steering had the feel of a midsize sedan.

It had a turning radius of 35.8 ft., a 2.9 turns of the wheel lock to lock, it switched lanes without a lot body sway and the sight lines were unimpeded. Our test vehicle had a panoramic roof sun roof and that let in even more light.

The MacPherson strut front suspension and multi-link setup in the rear provided a smooth un-accosted ride on the roughest roads. The Sorento was quiet, there was not a lot of wind noise considering its high profile and it had the solid feel of a quality build.

The exterior design was aggressive. Sharp lines and creases lent sophistication to the Kia Sorento’s look. For 2015, the crossover had a black mesh grille and the lower valance had a cross-hatched intake.

It had LED running lights above the headlights in the front that looked like eyebrows. The fog lights were pushed to the corners. In the rear it had LED taillights and an aggressively styled rear fascia and this Sorento rode on 19-inch wheels.

But we think the real value was inside. The Kia Sorento had a faux wood grain trim interior and it was chock full of equipment. It had leather trim seating, heated and cooled front seats, a wood trim steering wheel, push button start and stop, and the crossover’s premium audio system streamed Pandora off of our iPhone thanks to the Bluetooth connection.

And the vehicle could tow 3,500 lbs. Kia’s Sorento was a capable crossover but let’s talk about a couple of shortcomings. The crossover came with a smart key as well as a heated steering wheel. Turn the car off and restart it and the steering wheel heat control was still on if that’s the way it was when you turned it off. That’s good, particular in winter months.

However, lock the Sorento with the key fob, and then hit it a second time to engage the alarm system and the side view mirrors fold inward. Start the crossover and those mirrors do not automatically deploy. That is a safety issue. Drivers should know immediately what is around them when they get in their vehicles. You can’t do that if you have to manually redeploy the side mirrors. In the Sorento that is an easy fix, just program the side mirrors to redeploy when the vehicle starts.

Still surprising was the manual rear side window shades and the climate controls in the rear. There was a bunch of creature comforts in the 2015 Kia Sorento SXL. And as always, Kia offers value as evidenced by the price of our test vehicle: $40,795.