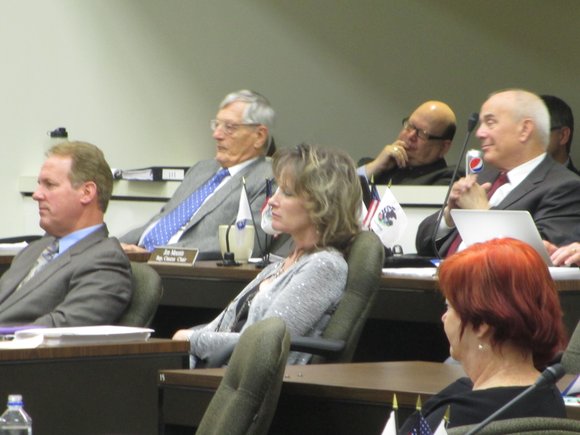 Several Republican Will County board members listen to the debate over increasing the property tax at last week's county board meeting. Photo by Karen Sorensen

Will County Board member Steve Balich

Democrats try to give the perception that they are for the working class yet fight for tax increases every time. There has not been a tax the Democrats have not liked, and they are all ears to finding new ways to raise cash for a government that, like a BEAST, needs more and more nourishment.

The Will County Board was split 13 to 13 (on approving the county budget, with a small tax increase for capital improvements), with the deciding vote going to the Democrat County Executive Larry Walsh.

The 2014 November election gave the majority back to the Republicans, who will be take office in December. The Democrats still had control at last week's lame duck session, with Walsh’s vote.

Republican control begins in December. A time of fiscal responsibility will return to the Will County Board. Unlike Democrats who refer to the property tax increase as just $5 to $10, Republicans understand the increase, coupled with the other property tax increases, puts an increased burden on families.

Before the vote, Republican board member Mike Fricilone proposed cutting the budget $1.8 million, (with the money) taken from the county’s capital improvements budget.

Republicans Jim Moustis and I, as well as a citizen from Tinley Park, pointed out that homeowners have seen property taxes continue to rise while home values go down.

I told the board, “Everybody’s struggling right now. Any tax increase at this time is bad.”

Moustis said, “Will County is just one of many taxing districts in the county. This is death by a thousand cuts. Will County can go forward, in my opinion, and accomplish our goals without raising taxes. Property Tax is only about 1/3 of the total revenue sources.”

Board member Chuck Maher saw no need to raise the budget with $100 million in reserves and savings, not included in the budget, from re-financing bonds at a lower rate.

A Times Weekly article said, “Republican Will County Board members didn't just vote against the 2014-15 budget Thursday but against all 11 levies needed to fund county government after Dec. 1.” It went on to say that Walsh was incensed by the Republican board members' action.


As a resident of Will County, I am incensed at this property tax increase and increases by the other taxing bodies.

When asked, Fricilone said, “The intent was never to shut down the government.” Fricilone repeated that the county needs to take a leadership role in stopping over-taxation by every taxing body.”

Will County Board member