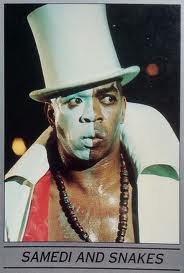 (NNPA) – His voice arrived first, deep and sonorous, prefiguring a man of enormous life and vitality, and such was the often imposing but impressive visage and physique of Geoffrey Holder, who many remember mostly from his promotion of Seven-Up “Uncola” commercials. But the multitalented Holder was much more than a pitchman. This artist with almost magical gifts died Sunday, Oct. 5 at this home in New York City. He was 84.

According to Charles M. Mirotznik, a spokesman for the family, Holder’s death was the result of complications from pneumonia.

Standing 6 feet 6 inches, Holder commanded practically every room he entered, and the niches not covered by his giant-like presence were filled with his resonant voice and laughter, his flamboyant style and persona, something magisterial, je ne sais quoi.

If viewers were reminded of the Jolly Green Giant or Mr. Clean from the many films and Broadway productions, it was understandable inasmuch as he had that same powerful countenance but embellished by a graceful sense of movement and artistic savoir faire.

Even the swerving arc of his autograph provides some semblance of his absolutely total absorption in the theater, dance and art as writer and dance authority Jennifer Dunning captures so well her biography.

Through these things he chose not to be called, we gather some idea of the complexity of his life, the expansiveness of his endeavors and successes.

“Life is strange and sweet and divine,” Holder told Dunning during one of her many interviews with him as he folded his long frame into a delicate white chair in the garden corner carved out his wife, the actress and dancer Carmen de Lavallade, in their loft in Soho. She notes that Holder’s paintings are everywhere.

And Holder throughout his remarkably productive career seemed to be everywhere—on stage, on film, in the studio, galleries, and anywhere a convivial ensemble was ready a night of gaiety and cultural chit chat.

Whether surrounded by a gaggle of his admiring friends or strolling the streets of Manhattan that he dearly loved and became fond of many years ago when he arrived from his homeland in Trinidad, Holder was immediately recognized and onlookers were not sure if it was Punjab from the movie “Annie,” or Baron Samedi from the James Bond movie “Live and Let Die.” Or he could have been, for some of his older fans, the principal dancer in the Met’s production of “Aida.”

If left to him, he was Geoffrey Holder, born August 1, 1930 to parents who had migrated from Barbados to Port of Spain, Trinidad and Tobago. He attended Queen’s Royal College and at very early age began demonstrating his prowess as a dancer in his brother Boscoe’s company. It was from this older brother that he got his first lessons in choreography and design.