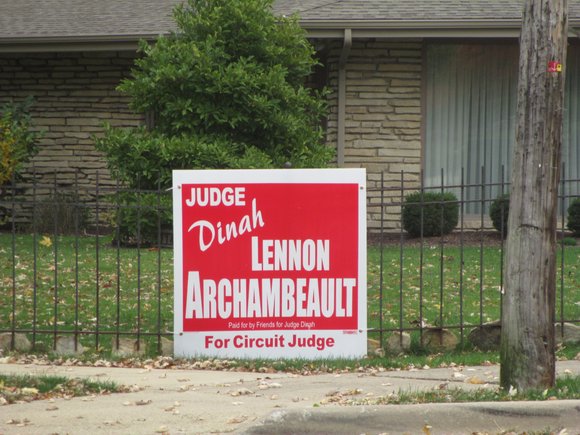 Signs endorsing Dinah Lennon Archambeault’s campaign for Will County circuit judge have been posted in the Joliet yard of Will County Associate Judge Robert Brumund. Photo by Karen Sorensen

Although judges are prohibited by law from making any sort of political endorsement, their spouses do not have to adhere to the same rules, Will County Chief Judge Richard Schoenstedt said.

A ruling made by the Illinois Judicial Inquiry Board clarified the issue but no change was specifically made to the code of conduct rules to reflect, Schoenstedt said. As a result, however, spouses can place campaign signs on property they co-own with their husband or wife, regardless of the fact that they are a judge, he said.

Schoenstedt said he did not know if that was the case of Associate Judge Robert Brumund, whose Joliet yard has three signs for judicial candidate Dinah Lennon Archambeault. Brumund did not mention that as a reason when questioned about the situation earlier this week.

Brumund, presiding judge in the 12th Judicial Circuit’s family court division, also made a $200 donation to Friends for Judge Dinah Lennon Archambeault on May 1, according to campaign disclosure forms the organization filed in July. Archambeault is an associate judge in the family court division who is seeking election to a Will County circuit court judgeship in the 12th district’s second subcircuit.

According to the Code of Judicial Conduct, established by the Administrative Office of the Illinois Courts, judges are ordered to “refrain from inappropriate political activity.” Among other things, judges cannot “publicly endorse” a candidate running for office.

When asked to comment, Brumund offered a cryptic remark about his residency, declining to offer a more detailed explanation before hanging up the phone.

Campaign contributions do not violate the judicial conduct code.

The Western Avenue property is listed in county records as belonging to Robert and Karen Brumund, having been purchased in 2006. The mortgage was paid off and the deed released by First Midwest Bank on Sept. 9, 2014, according to the Will County recorder of deeds’s office. Property taxes for 2013, due in May and September of this year, were paid by in full by the couple, according to the county treasurer’s office.

There is no record of the property being sold or moved into a trust in the Joliet City Clerk’s Office. The city requires sellers to pay a real estate transfer tax when a property is sold or its ownership status changes.

Will County Chief Judge Richard Schoenstedt was not available for comment on the situation.

The Illinois Judicial Inquiry Board is charged with investigating violations of the judicial conduct code that are brought to them, and can also initiate investigations on their own when issues come to their attention. No formal complaint has been filed on this issue.