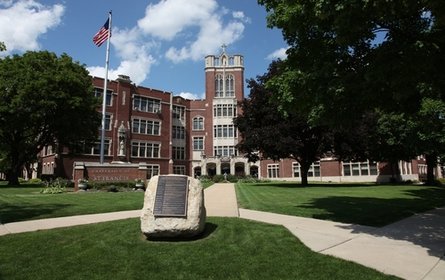 The University of St. Francis in Joliet

The University of St. Francis provided this news release:

For the 11th consecutive year, the University of St. Francis is ranked in the top tier of U.S. News & World Report’s "Best Colleges" list and is the third highest ranking Catholic master’s institutions in the state. The university is also at the top on the best colleges for veterans list.

USF is one of only six Illinois colleges and universities noted on the "2015 Best Colleges for Veterans" list.

And, for the fifth consecutive year, USF has also been given the distinction of an "A+ School for B Students" from U.S. News & World Report. USF is one of only 47 Master’s Midwest schools to receive this distinction and one of only eight private Illinois master's institutions earned this distinction.

U.S. News & World Report ranks nearly 1,800 colleges and universities worldwide. The 2015 edition of the best colleges rankings is a tool for prospective students and parents looking for the school that will best fit their needs. The guidebook is available in print and at www.usnews.com/colleges.

Earlier in the year, USF was also ranked among the best online education programs in the nation by U.S. News & World Report. In its "Best Online Education Programs 2014." USF was 81st of 276 schools for its online bachelor’s programs and is the fourth ranked private Illinois institution.

USF’s graduate business programs were the top of Illinois private institutions in the Best Online Graduate Business Programs 2014 listing and ranked 80 out of 225 nationwide.

Graduate Education programs are also ranked the top private in Illinois and at 36 out of 195 schools ranked.

In the Best Online Nursing programs listing, USF is ranked the sixth top program in Illinois and at 86 of the 128 schools ranked.

A pioneer in online learning, USF has been one of the largest providers of online education in Illinois since it piloted its online business program 15 years ago.

The University of St. Francis has been named, for the fourth year, a "College of Distinction" by CollegesofDistinction.com, dedicated to honoring schools nationwide for their excellence in student-focused higher education.

For the eighth consecutive year, the University of St. Francis (USF) has been named a "Best in the Midwest" institution by The Princeton Review’s "2015 Best Colleges: Region by Region."

The university has also been listed as one of the Most Affordable Online Colleges by AC Online and as a Military Friendly School.