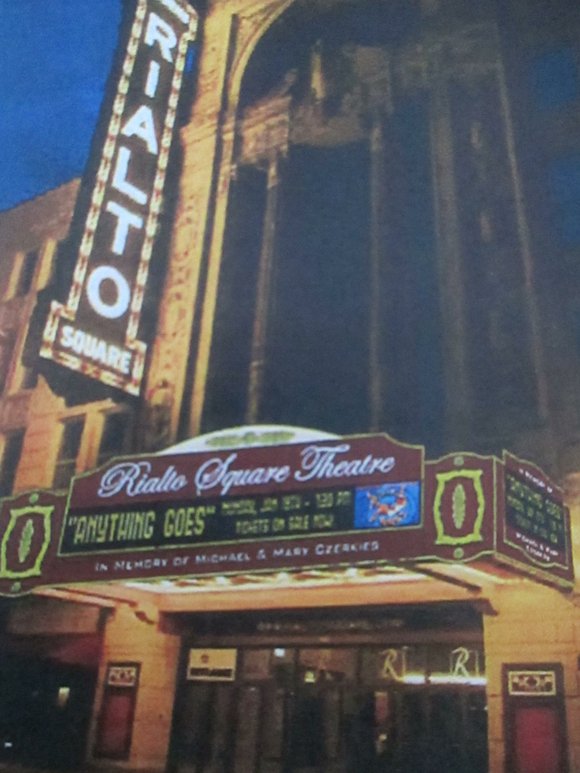 Courtesy of the Rialto Square Theatre

Close-up view of the revised Rialto Square Theatre marquee, which reduces the size of the memorial to Michael and Mary Czerkies by 20 percent.

A proposal to keep the new Rialto Square Theatre marquee's "memorial" remain in place for the next 25 years was tabled Thursday after questions arose over the sign's final look and how bids for its construction were approved.

The Will County Metropolitan Exposition and Auditorium Authority, which oversees the Rialto, held a special meeting to consider the proviso that would guarantee the memorial to donor Ed Czerkies' parents not be removed should a future authority board decide it no longer wanted to include the language as part of the sign.

Czerkies attended the meeting, but wished to remain anonymous and did not participate in the discussion.

Authority Chairman Jim Smith said Czerkies is still considering sign changes that would reduce memorial print size on the sign by about 20 percent, which was proposed as a compromise in the face of public criticism about including it on the sign at all. The letters would be about 7.5 inches tall, Rialto General Manager Randy Green said.

A rendering of the revised design was distributed at the meeting. The only unsettled aspect of the change is the memorial's typeface style, Smith said.

Critics have said that allowing Czerkies or any other donor to receive credit on the sign is akin to selling the marquee's naming rights, which would have likely generated more than the $350,000 Czerkies has paid.

Others have complained the memorial makes it appear as if the theater itself or the show being advertised is in memory of Michael and Mary Czerkies and that the sign is too large and veers too far from the historic Joliet theater's architecture.

Beyond that, however, are questions that came up Thursday about the 2007 bidding procedure that awarded construction of the new marquee to Landmark Sign Group, the same firm that came up with the design.

Cheryl Grate, president of Grate Signs of Joliet, said her company did not win the sign design bid, but was told in a letter sent to her by the Rialto that the firm would be allowed to bid on its construction.

However, that did not occur, and Landmark won the contract. The Chesterton, Ind.-based company was described as the only one that met the theater's criteria for the work, which Grate considered a slam to her business.

"I don't think the bidding process was fair, and I want to stand up for my company," she said.

It's not clear why Grate was not invited to bid, especially given that the company has been used by the Rialto many times to do repair work on the existing marquee, officials said. Green was directed to go back into the records to determine how the bidding process was handled and how the bid request was worded.

Until the board has that information -- and a final rendering of what the sign will look like is available -- authority members tabled the vote on Czerkies' request for a 25-year guarantee to its Jan. 28 meeting.

The situation is a sticky one given that construction of the sign is about 75 percent complete, and the Rialto would be on the hook for that cost should Czerkies ask for the money to be returned, Smith said.

Although Czerkies said in a letter to the editor provided to The Times Weekly that he would be "happy" to have his donation returned, he has not asked for that to happen. It is not known if the theater would be obligated to return the money should he ask for it.

Another unknown is whether the theater will need to get the Joliet Historic Preservation Commission's approval a second time should the sign's original wording size and style be changed.

Residents who attended the authority meeting Thursday said they'd be willing to give their own money and conduct a fundraising campaign to collect the $350,000 needed if it meant the theater would put up a new marquee similar to the one currently on the building.