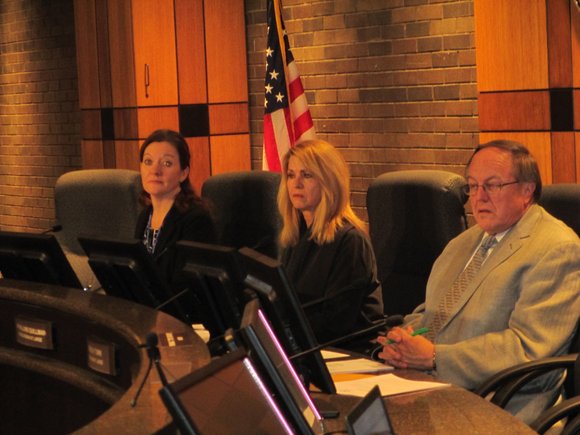 The Joliet City Council kicked off 2015 with gusto. Three items grabbed the most attention.

The ongoing controversy surrounding the proposed Rialto Square Theatre marquee replacement took center stage at Monday’s Pre-Council meeting and again at Tuesday’s meeting. Whether or not the marquee proposal moves forward may be decided by the Rialto board at a special meeting scheduled for Thursday at the Rialto offices. The public is invited.

Next was a meeting of the Joliet Electoral Board Tuesday that decided District 4 Councilwoman Bettye Gavin will remain on the ballot for reelection this coming April. Mayor Tom Giarrante normally would have chaired the board hearing but recused himself because he appointed Gavin to the position last April. He has also has made statements that Gavin will be the only candidate on the ballot he is supporting.

Finally, the announcement this week regarding the yet-to-be determined price the city must pay for the Evergreen Terrace housing project created some lively discussion at Tuesday’s council meeting. The disparity between the appraisals from the current owners and the the city is more than $9 million. The two parties will attempt to negotiate the difference between the appraisals before the scheduled trial date of March 10. The trial will set the price if the owners and the city have not agreed on the property value by then.

Based on the current number of 356 housing units the property will generate approximately $4.5 million annually from rent payments. However, the original plan was to reduce the number of units which would also reduce the amount of income they currently generate.

All redevelopment costs must also be paid for by the city, which is also responsible for providing a minimum of 115 units for current and future residents of Evergreen Terrace.

The location of those units can be at the current site or elsewhere within the Joliet corporate limits. It is most likely to remain at the current location since it is close to public transportation and other services utilized by current residents.

A reduction of the current number of units to 115 may not generate the required revenue to cover the cost of the property purchase, the redevelopment, and the administrative and maintenance expenses.

The only certainty at this time is that the redevelopment of Evergreen Terrace is several years into the future. A plan must now be devised that will satisfy all of the promises made over the last few years in regards to Evergreen Terrace.

The beginning of every year often brings about the desire to predict the coming year’s big events. Predictions for the future can be interesting as well as unusual.

The 14th century seer Nostradamus still gets attention for some of his predictions. For instance, he predicted that in 2015 humans would live to be 200 years old, be able to communicate with animals and taxes would be abolished. He made that prediction 450 years ago.