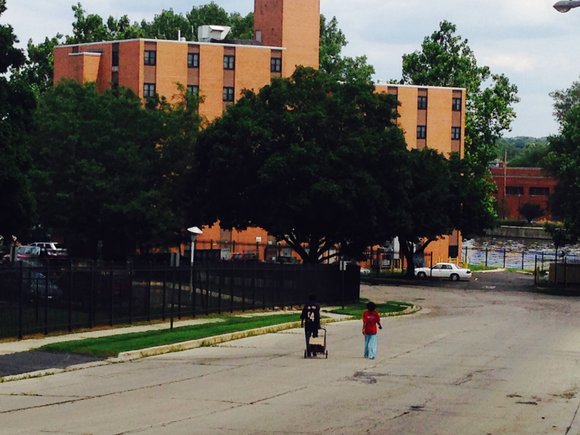 The Joliet City Council must decide if it wants to complete the purchase of Evergreen Terrace, and what to do with the 356-unit apartment complex if it does. Photo by Karen Sorensen

If Joliet borrows $15.7 million from its reserve fund to buy Evergreen Terrace, there will be no cash available to make any substantial changes to the apartment complex for at least seven years, City Manager Jim Hock said.

Hock’s assessment of the situation was made Tuesday night as Joliet City Council members struggled with the myriad choices of what to do with the blighted housing complex now that they’ve won the right to purchase it through condemnation. The deadline to close on the sale is Sept. 1, regardless of whether the owners appeal of the condemnation verdict and/or the purchase price.

The reserve fund money would be repaid with $3.3 million in federal Community Development Block Grant cash granted to the city as part of an Evergreen lawsuit, $300,000 in new CDBG money and a $2.2 million in a capital improvement fund created by the current owners that they are obligated to give the city, Hock said. The rest would be paid over the next seven years or so from the $1.3 million profit they expect to make annually from apartment rent, he said.

That leaves no other option but to sell bonds and possibly raise taxes if the complex is to be renovated. On Monday, the council will hear four possible redevelopment options from Holsten Properties, the company hired to oversee management of the buildings and to guide the city on improvements.

A brief review of two of the four alternatives was presented to the council by Mayor Bob O’Dekirk.

The first would reduce density from 356 units to 302, and calls for a city investment of $140 million to tear down two buildings, build one small building, convert another into condos or town homes, renovate the remaining buildings, build a community center, park and underground parking lot, and purchase the remaining single-family home on the site so the city would own all of the land between Western Avenue and Division Street and between Broadway and Bluff streets.

Depending on variations, including the number of federally subsidized Section 8 units, the price tag could be reduced to somewhere between $69 million and $60 million.

The second plan would involve far less construction and calls for a density of 322 units. Units would be remodeled and enlarged and a parking lot for 140 vehicles built. A community center and park remain in the plan, per the lawsuit settlement between the city and the U.S. Department of Housing and Urban Development. Again, depending on the number of Section 8 apartments, the cost to the city could range between $24 million and $11 million.

“I will say upfront that I was underwhelmed with what was … presented, and I recommended that Holsten come up two additional plans so that four plans will be presented to the city council next Monday,” O’Dekirk said. “I didn’t think this was reflective of what the council wanted or what the people in Joliet were saying they wanted.”

It’s clear that council members are not sure what the next step should be, with Councilman Larry Hug advocating the city pull the plug on the purchase and write off the $7 million spent in legal fees to win the suit and Councilman John Gerl suggesting the council consider returning to the original course set more than a dozen years ago, where the plan had been to tear down the buildings, relocate tenants to new homes and use the site for public park facilities.

“This is probably one of the biggest decisions I’ll ever make up here,” Councilman Jim McFarland said. “I feel like this short amount of time, this little window, we’ve got to digest all this information and make the right decision. … I’m just a little overwhelmed.”

Hug said he believes the city cannot afford to purchase the troubled housing complex for a number of reasons, not the least of which is it would require Joliet to use the bulk of its federal government block grant money typically earmarked to fix blighted areas all over Joliet.

Beyond that, the city shouldn’t be competing with the Housing Authority of Joliet for the tax credits and funding the full- or partial-Section 8 project would require nor should it be exposing itself to the insurance risk should it be sued for something that happens at the apartments, he said.

“This is not an affordable project,” Hug said. “We’re either going to cut services throughout the city or we’re going to virtually bankrupt the city.”

Councilwoman Jan Quillman, one of just two council members still on the board from when the condemnation suit was filed, acknowledged the original plan had been to tear the complex down because it had become so blighted and crime-ridden. The only reason the apartments are nicer and crime down now is because the owners felt compelled to make improvements to stave off condemnation, she said.

“If this were to fall back into the hands of a private owner, it’s going to fall back to the way it was 10 years ago,” Quillman said.

For that reason – and the fact that it would be less expensive – the council might be well-served to revisit the original concept, Gerl said.

The cost of razing the buildings, converting the site into a park, providing housing vouchers to two-thirds of the residents and building new housing for the remaining 115 (per the city’s settlement with the feds) would likely be far less expensive than trying to renovate what’s there and owning the complex for the foreseeable future, he said.

“I don’t think that’s a bad idea; I think it’s a good idea,” Gerl said. “I’m hoping that Holsten has that option with them when they come on Monday. You’re looking at a $15 (million) to $20 million investment (for the original concept), and how does the city come up with that money.”

The other unknown in the equation is what the city’s liability is if it doesn’t act. Gerl asked whether the city could be sued by the current owners if it didn’t proceed with buying the complex or is found in contempt by a judge.