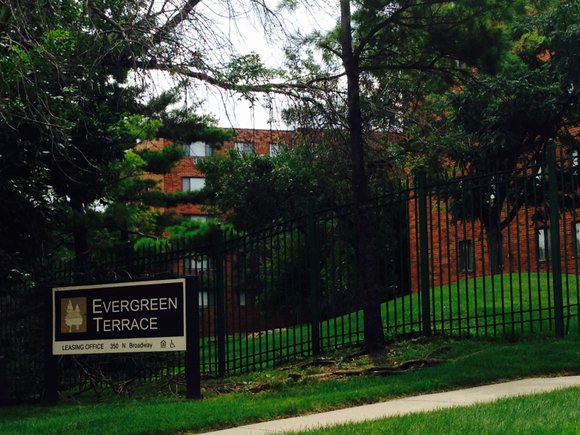 The Evergreen Terrace apartment complex is located on Joliet's near West Side, along the banks of the Des Plaines River. Photo by Karen Sorensen

Joliet business officials urged the Joliet City Council Monday to complete its purchase of Evergreen Terrace – a sale the city may not be able to reject even if it wanted to, City Manager Jim Hock said.

Last week, Hock said he didn’t know what would happen should the council decide not to follow through in condemning the near West Side apartment complex and opt to simply cut its losses -- despite a 12-year court battle to acquire it.

Monday night he had the answer.

“If we don’t give the court the $15 million by Sept. 1 (to buy the 356-unit Evergreen Terrace), we would owe $7 million to the owners,” Hock said. “And then the judge could fine the city besides.”

The $7 million is for the owners’ legal fees, and it would be on top of the $6 million the city has spent itself to fight the case in court.

“So, for $15 million we have a building that we can make better, with a better quality of life (for the residents),” Councilwoman Jan Quillman said, “or we walk away and we lose $13 million and god only knows how much more, with nothing to show for it.”

The court-ordered deadline for the council to decide is Sept. 1. If it does proceed with the sale, it must also decide how it will pay for complex and what it will do with it once it’s under city ownership.

Of the $4 million-plus the subsidized apartments generate annually, it’s estimated the city could see a profit of about $1.2 million a year. That will be enough to repay the bonds sold to make the purchase over seven to nine years – longer, if other expenses, such as legal fees are included – but does not provide any additional money to make any major improvements.

At the Monday meeting, Holsten Properties presented a scenario in which nothing is done to change the Des Plaines River-fronted property between Western and Division streets as well as three other possible plans.

The most “deluxe” proposal calls for demolition of two buildings, the construction of one building, the addition of three floors to three buildings, an underground parking lot and a riverfront park. Depending on how many of the 302 units are subsidized, the project would cost about $140 million, with $60 million to $69 million coming from the city (assuming Holsten is able to secure tax credits and other funding for the work, which is not guaranteed).

The second scenario would require far less construction but calls for extensive building renovation as well as a large riverfront park and additional parking. The price tag for 322 units would be in the neighborhood of $40 million to $42 million, with the city paying between $11.2 million and $24.1 million depending on the percentage of subsidized apartments.

Both would be done in three phases as money becomes available, with the best case situation being about six years for completion, Peter Holsten said.

The third option calls for the retention of just two buildings on the site – enough for the 117 units that the U.S. Department of Housing and Urban Development mandates the city must keep for 20 years – and for the rest to be razed. Residents in the demolished buildings would be given vouchers for new apartments and moving assistance.

After the 20 years, the remaining buildings could also be removed.

Under any scenario, the city is obligated to create a riverfront park and a community center for Evergreen residents that might also be open to the public.

Councilman Jim McFarland asked Hock to provide a payment plan for all of the Holsten scenarios so that council members can see what money would be used to repay the bonds sold for the work.

The only other option might be to reach a settlement with the Evergreen owners in which the appeal would be dropped and the city let off the hook legal fees in exchange for dropping the condemnation. Such a deal was proposed to the former city attorney more than two years ago, before the city won its case, but it was never brought to the council.

John Greuling, president/CEO of the Will County Center for Economic Development, urged the city to proceed with the sale, regardless of which scenario they choose to pursue. City ownership of a prime piece of real estate could be key to revitalizing downtown Joliet, even if it’s decades down the road.

“We think the redevelopment of Evergreen Terrace is a major, major component of the renaissance of downtown Joliet,” Greuling said.

“If there’s no money, you have 10, 20 years of time, without hurting your pocketbook and helping the people who live there. ... At the same time, you reserve the right for successful downtown riverfront for Joliet, which is what we all want, which we are all waiting for.”

Mary Jaworski, executive vice president of the Joliet Region Chamber of Commerce, said the purchase is good for the city – and for the residents who live in the complex.

“We need to improve the safety and quality of life of those who live in Evergreen Terrace as well as those in the neighboring community,” Jaworski said. “The collective voice of our board and the members of the business community has been to acquire and move forward on the plan to redevelop Evergreen Terrace. We strongly urge you … to take advantage of the opportunity.”

The bottom line is, regardless of what the motivation is or how it’s changed in the last 12 years, buying the complex is the right thing to do for the city and the residents, said Jim Roolf, a member of the Joliet City Center board and senior vice president of First Midwest Bank.

“You make the best decision you can today with the best available information that you have,” Roolf said.