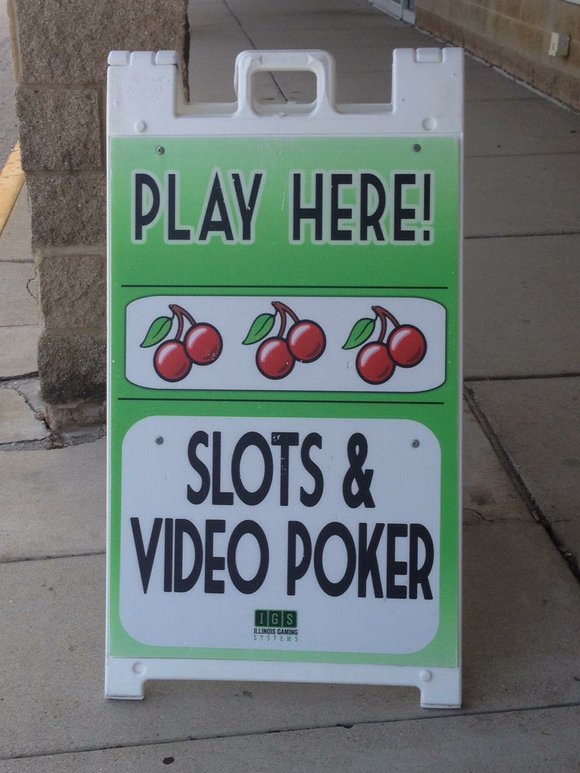 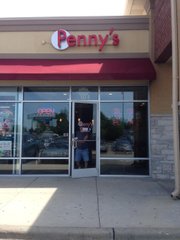 Gaming cafes, such as Penny's off Jefferson Street in Joliet, are tucked into strip malls with lots of traffic. 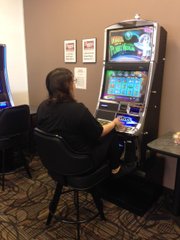 A patron tries her luck on a video gaming machine on Bonny's Bistro, one of many gaming cafes that are located in Joliet.

Bonny's Bistro sells soft drinks, beer, wine, sandwiches and snack foods to the patrons who come in to use the business' five gambling machines. 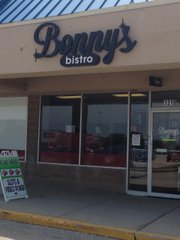 Bonny's Bistro, located in the same Larkin Avenue strip mall as Hobby Lobby and Burlington Coat Factory, could be mistaken for a restaurant were it not for a neon sign in the window and a sandwich board sign advertising slot machines and video poker set up outside.

The business names are innocuous enough – Betty’s Bistro, Stella’s Place, Dotty’s. They’re meant to appeal to women, they’re tucked away in strip mall storefronts and appear at first glance to be cozy spots to grab a sandwich and maybe a drink.

And they are. But don’t be fooled.

The main reason they exist – and why they’ve been popping up all over Joliet and many towns in Will County – is not to attract customers looking for a meal but to get patrons to feed cash into video gaming machines.

The owners are taking advantage of the state’s loosely written gaming rules by obtaining liquor licenses from the municipalities in which they’re located and then using them to secure state licenses to install up to five gambling machines in each cafe. Selling alcohol is a prerequisite to obtaining a gaming license.

It’s a safe bet most legislators didn’t anticipate the proliferation of such businesses when they approved the measure, which was to help local bars and social groups make extra money while creating a new Illinois tax source. Or maybe they did – gaming cafes are not a new innovation; many states had them long before Illinois. Regardless, some Joliet City Council members say they’ve had enough.

Watching what was to be a limited expansion of gambling blossom into a big business that’s draining away serious cash from the city’s two casinos has prompted officials to question if something should be done.

Councilman Jim McFarland’s call for a moratorium on new liquor licenses for them is to be discussed at an upcoming land use and legislative committee.

What’s maddening, McFarland said, is the owners don’t even make the pretense of being a restaurant or bar. Many serve pre-made food, beer and soft drinks out of coolers, he said. As long as an employee pours the liquor, they’ve met the standard of the law.

Worse, the money made doesn’t go to local businesses but to large corporations, most which are not based in Illinois, he said.

“If it’s a bar or restaurant that’s one thing, but if you open a place just for gaming, I think we have enough of that in the city,” he said.

It’s easy enough to control through liquor licenses, O’Dekirk said. The city can issue them to businesses making their primary income from a legitimate bar or restaurant and reject those proposing what appear to be gaming cafes, he said.

That can be tricky, however, as the Will County Board found out when contemplating the same thing a few months ago. Ultimately, the board pulled the plug on all video gaming, grandfathering in those that already exist but saying no to future expansion.

County Executive Larry Walsh said he could understand board members’ frustration with the vague law and those taking advantage of it, but disagreed with the total ban. It hurts small business owners and social organizations, he said, and will only prompt those who want gaming licenses to go to towns that allow them.

“In my opinion, it doesn’t violate the letter of the law, even if it wasn’t the original intent of the law,” Walsh said.

Casino representatives have said video gambling is taking a big toll on their business. They maintain the number of machines now in Illinois – 19,873 operated by 4,785 businesses – is the equivalent of opening 17 new casinos.

Both companies, however, vigorously opposed the General Assembly’s approval of video gaming three years ago.

It’s easy to see why. Just in April, Illinois residents poured $950 million in the machines, with losses adding up to $76 million. Of that amount, $19 million in taxes went to the state, $3.8 million went to municipalities and the rest was pocketed by the owners.

While it’s far more expensive to run a casino than it is to rent a storefront and put sandwiches and beer in a cooler, the local casinos are still making money at this point.

And while the city council may be worried about protecting the big players, which earn them far more in taxes than the video gaming ever will, there’s a reason the state hasn’t tightened the legal loopholes and many Will County towns, such as Romeoville, are welcoming gaming cafes. The state is making millions in new tax revenue and towns that didn’t get a casino license back in the 1990s are now seeing some of the action.

“This is really another piece of the pie for all those cities throughout the state that don’t have casinos,” Joliet Village Manager Jim Hock conceded. “We have been spoiled.”