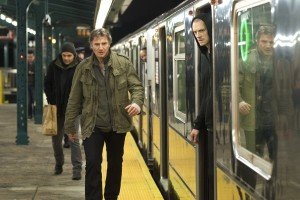 Liam Neeson stars in the new thriller "Run All Night."

Hit man Jimmy Conlon (Liam Neeson) and mob boss Shawn Maguire (Ed Harris) have been BFFs for decades. In fact, the blood brothers from Brooklyn are so close that they routinely recite their loyalty oath, “Wherever we’re going, we’re going together” as a reminder of their enduring alliance.

However, that seemingly unbreakable bond is shattered in an instant after Shawn’s son Danny (Boyd Holbrook) is gunned down in the wake of a drug deal gone bad with a couple of Albanian heroine dealers. Trouble is, Jimmy’s son Mike (Joel Kinnaman), who makes an honest living as a chauffeur with a limo company, just happened to be in the wrong place at the wrong time. For, he had no idea what was up when he was hired to serve as the pair’s getaway driver.

Nevertheless, revenge-minded Shawn decides that his best friend’s kid has to pay with his life. So, he informs Jimmy that he’s sending his assassins after Mike to even the score.

Of course, Jimmy warns his son. Mike then calls the cops, ignoring his father’s advice to avoid the local police since they’re bought and likely in cahoots with the Maguire crime family. When that turns out to be true, father and son end up on the run all over the city from both the authorities and bloodthirsty bad guys.

Thus unfolds Run All Night, the latest high-octane offering from Liam Neeson who’s again typecast in a role that he’s become closely associated with ever since his phenomenal performance as an overprotective parent in Taken. This picture’s premise puts a slight twist on the familiar theme in that Jimmy’s not exactly an empathetic protagonist given his long career as a feared enforcer known as “The Gravedigger.”

Still, he’s sorely in need of a shot at redemption, especially in the eyes of his estranged son who rejected the notion of ever following in his father’s footsteps. Instead, Mike tried to make it as a boxer, and when that didn’t pan out he took the legit job as a limo driver.

Run All Night was directed by Jaume Collet-Serra who previously worked with Liam Neeson on both Unknown (2011) and Non-Stop (2014). Three times is definitely the charm for the pair as this adrenaline-fueled adventure proves to be their best collaboration yet. The film also features an excellent supporting cast which includes Nick Nolte, 2015 Oscar-winner Common (for the Best Song “Glory”) and veteran character actors Vincent D’Onofrio and Bruce McGill.

Liam Neeson delivers afresh in an edge-of-your-seat, high body-count thriller every bit as good as they come!

In English and Albanian with subtitles