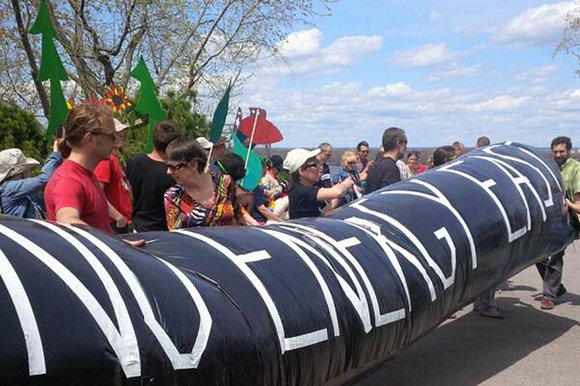 Protestors from the Canadian activist group Defend Our Climate rally against Transcanada Corp.'s proposed 2,800 mile pipeline from Alberta to Quebec and New Brunswick.

Dear EarthTalk: The proposed KeystoneXL oil pipeline from Canada into the U.S. seems to get all the headlines, but shouldn’t we also be worried about the Energy East pipeline?

The Energy East Pipeline is a $12 billion project proposed by TransCanada Corp. that will combine existing, converted natural gas pipelines with new pipeline construction to carry oil some 2,800 miles across Canada from Alberta’s tar sands fields to export terminals in Quebec and New Brunswick. Unlike TransCanada’s Keystone XL pipeline proposal, which aims to transport oil from Alberta to Nebraska, Energy East would not directly cross into the U.S. But environmentalists on both sides of the border are concerned since Energy East would transport 1.1 million barrels of tar sands oil a day—25 percent more than Keystone XL—and will be the longest oil pipeline on the continent.

Just as Keystone XL has been shrouded in controversy and debate in the U.S., Energy East faces fierce opposition in Canada, where groups like Environmental Defence and the Council of Canadians believe the pipeline threatens both sensitive ecosystems and populated areas with the risk of a spill. According to the report Liquid Pipeline: Extreme Energy’s Threat to the Great Lakes and the St. Lawrence River, by Maude Barlow of the Council of Canadians, Energy East would cross the northern end of the Great Lakes, including the St. Lawrence River Basin watershed, threatening many water systems along the way.

“In its preliminary project description filed with the National Energy Board in March 2014, TransCanada outlined details about its plans to build a port in Cacouna, Quebec, just north of Rivière-de-Loup on the St. Lawrence River,” the report states. “Local residents are very concerned that any accidents involving either the pipeline or marine shipments along this route would put the already endangered beluga whale population at greater risk.”

For its part, TransCanada says that it “understands the important role all aquifers, rivers and lakes play in maintaining sensitive and vital ecosystems across Canada,” but asserts that “pipelines remain the safest, most efficient and most environmentally friendly mode of transporting energy across the continent.” Before the Energy East pipeline goes into service, TransCanada plans to clean and thoroughly inspect the converted section of the pipeline. The company has also promised to avoid crossings of important water bodies to minimize disturbances of sensitive aquatic ecosystems. Highly-trained technical staff in TransCanada’s control center would monitor the pipeline 24/7.

While construction and maintenance of the Energy East pipeline would create some 14,000 jobs during its first seven years while providing upwards of $7.6 billion in tax revenue to pay for schools, roads and other public services across Canada, many Canadians remain concerned that a spill could threaten or destroy their livelihoods.

Regardless of these concerns, TransCanada is currently working to get final regulatory approval from Canada’s National Energy Board (NEB) to start work on Energy East and hopes to have construction completed by the end of 2018. Environmentalists are still holding out hope that NEB will reject Energy East on environmental and/or socio-economic grounds, and continues to drum up support across Canada and beyond for shelving the beleaguered pipeline.

EarthTalk® is produced by Doug Moss & Roddy Scheer. e-mail us your question: earthtalk@emagazine.com.