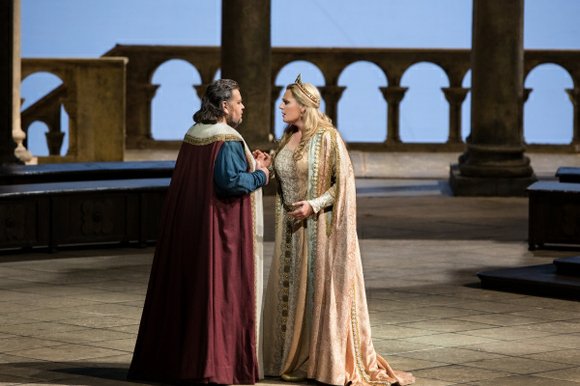 The Metropolitan Opera brought all of its vast resources into full focus to realize a superlative production of Richard Wagner's Tannhauser which will be seen in a Met Live HD Encore Presentation Wednesday, November 4 at 6:30pm local time. Check local listings for theatre locations.

Music Director James Levine led a finely drawn reading of Wagner's lush orchestration, emphasizing the central theme, the hymn sung by the pilgrims which would be repeated at several key points throughout the opera, building the passages slowly. He allowed the magnificent Wagnerian horns to ring out, while coaxing sweet sounds from the woodwinds and somber, dramatic passages from the strings.

The vocal ensemble was among the best to be presented on the Met stage this season. Tenor Johan Botha shined as the knight minstrel Tannhauser. His brilliant voice changed in character throughout the performance; at first proclaiming his youthful ardor for Venus, sung with voluptuous tones by Michelle DeYoung, then moving into more dramatic territory, alternately reflecting despair and emotional trauma as he struggled with his conflicting emotions.

Eva-Marie Westbrook gave the most impressive performance in the demanding role of Elisabeth, the object of Tannhauser's affection.

The opera tells of Tannhauser's early existence in the subterranean lair of Venus, who continues to lure him back with her siren song at several key points in the opera.

Tannhauser longs for Elisabeth and enters into a singing 'duel' with Wolfram, sung by Swedish baritone Peter Mattei. His Song to the Evening Star is one of the high points of the opera.

James Levine's conducting and the performances by the opera chorus and orchestra were exceptional. The camera work by Live In HD Director Barbara Willis Sweete focused in on the soloists at key moments, showing the brilliant playing of the Wagnerian horns and the exceptional dexterity of the harpist, who figured quite prominently in the solo sung by Peter Mattei.

Costumes by designer Patricia Zipprodt, were outstanding and reflective of both the Medieval period of the story and the specific nature of the characters. Some of the costumes, according to Zipprodt in an intermission interview with Live In HD Host and Met soprano Susan Graham, dated back to the original production by Otto Schenk in 1977.

The Metropolitan Opera Chorus is a key element in the success of this sweeping production. Chorus Master Donald Polumbo made the pilgrim theme a thrilling moment.