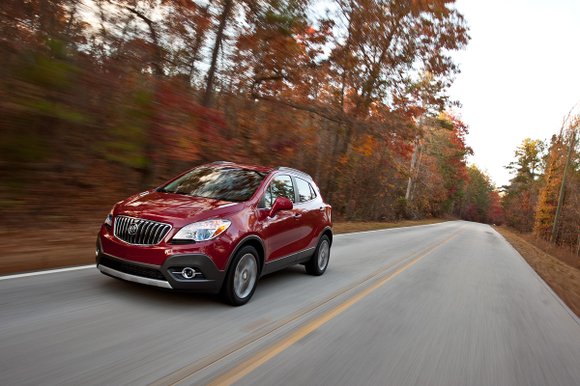 Buick has a sleeper in the 2015 Encore. The little crossover vehicle garnered plenty of looks and much delight as folks admiringly asked what it was. They were surprised to hear that it was a Buick.

Technically, the Buick Encore is a compact SUV or crossover, whatever category you prefer. Our test vehicle was powered by a 1.4 liter four cylinder engine that made 138 horsepower and 148 pound-feet of torque.

Mated to a six-speed automatic transmission, the Encore didn’t have a lot of oomph under hard acceleration. The ride could get a little bumpy because of the short wheelbase, 100.6 inches. There was less space for the frame to absorb the shock of sharp bumps in the word. Still it was capable.

And the road worthiness of the crossover would be even more evident in serious winter climes. Our Encore was equipped with all-wheel-drive which automatically activated when needed. The crossover had electric power steering. There was not much feedback from the road but the feel was acceptable. After all, the Buick Encore was a premium crossover not a performance sedan.

The Encore had Buick’s curved styling, the signature waterfall grille and blue accented headlights. It had chrome accents and window surrounds and portholes on the hood that really didn’t work well because the hood was so short.

Still it was a brand identification design cue. More questions would have been asked if the portholes were not there. Our Encore had painted lower panels, body colored door handles with chrome strips and a stainless steel exhaust tip.

The interior flowed smoothly. The instrument panel curved around and flowed into the door panels nicely. The center stack featured a seven-inch high resolution screen.

There was plenty of room in the front seats as well as the back seats. Buick says the Encore can carry five people but we think it can carry four people nicely. Three adults sitting in the back seats would be a crunch.

It is too bad that Buick can’t fire the bean counters because there keeping the brand from being all that it can be. Despite having some surprising equipment like a heated steering wheel, heated front seats, a review camera, remote start, automatic windshield wipers and Wi-Fi, some decisions to save a buck go beyond the realm of frugal and into the dark forest of mediocre.

For instance, our test vehicle had power windows that automatically went down. However, only the driver’s window went up automatically. The Encore also had a power driver’s seat cushion but the back of the seat adjusted manually. Why? The only logical reason is to save money.

But this kind of stuff obviously cheapens the brand and that can be disastrous for a nameplate trying to position itself as a premium brand. We could envision the Encore losing sales if customers were to check this sort of stuff in the showroom or not want to buy a second Encore. It’s called retention.

And this is a mentality because the cost of the equipment can be baked into the price of the car, it doesn’t or wouldn’t add that much to price of the Encore. The 2015 Buick Encore is a great little crossover that would be even better if the bean counters would stop forcing these tacky equipment choices down engineers’ and designers’ throats.

Still, our test vehicle had a sticker of $32,355. We thought that a great price for a well-equipped and well-mannered 2015 Buick Encore. So the bean counters might be right.