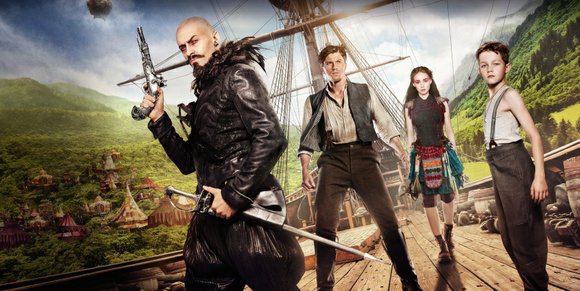 Pan (PG for mature themes, mild epithets, action and violence) Levi Miller plays the title character in this prequel to Peter Pan, a fantasy adventure about a 12 year-old orphan spirited away to Neverland, a magical kingdom where he is fated to find his destiny. With Hugh Jackman, Rooney Mara, Garrett Hedlund and Amanda Seyfried.

Breaking Through (Unrated) Coming-of-age drama about a Youtube dance sensation's (Sophia Aguiar) attempt to balance sudden fame and her authentic identity before she loses everything she cares about. Co-starring Julie Warner, Jay Ellis and Robert Roldan.

A Faster Horse (Unrated) Reverential documentary chronicling America's love affiar with the Mustang, the crown jewel of the Ford Motor Company fleet, from its introduction in 1964 to its recent redesign earlier this year.

The Final Girls (PG-13 for profanity, drug use, violence, sexuality and crude humor) Horror comedy revolving around the grief-stricken daughter (Taissa Farmiga) of a recently-deceased scream queen (Malin Akerman) who is magically transported into her mom's most memorable movie where she ends up on the run from a deranged maniac (Dan Norris) while having to fend off the unwanted advances of young alpha males with raging hormones. With Alia Shawkat, Alexander Ludwig and Nina Dobrev.

The Forbidden Room (Unrated) Undersea adventure about a lumberjack (Roy Dupuis) who mysteriously materializes aboard a submarine stuck on the bottom of the ocean with a cargo of unstable explosives. Featuring Charlotte Rampling, Geraldine Chaplin, Clara Furey, Mathieu Amalric and Udo Kier.

In My Father's House (R for profanity) Prodigal father documentary chronicling Grammy-winning rapper Rhymfest's reunion with the deadbeat dad who abandoned him at an early age.

Knock Knock (R for nudity, profanity, disturbing violence and graphic sexuality) Home alone horror flick about a happily married man (Keanu Reeves) who comes to regret allowing a couple of stranded damsels-in-distress (Lorenza Izzo and Ana de Armas) enter the house while his wife (Ignacia Allamand) was away for the weekend. With Aaron Burns and Colleen Camp.

The Prime Ministers: Soldiers and Peacemakers (Unrated) Israeli documentary examining the legacies of Levi Eshkol, Golda Meir, Yitzhak Rabin, Menachem Begin and Shimon Peres administrations as seen through the eyes of Yehuda Avner who served in each of their administrations.

Reversion (Unrated) Sci-fi thriller about the daughter (Aja Naomi King) of a high-tech billionaire (Colm Feore) who starts wondering about the accuracy of her memories of her late mother after she's kidnapped by a stranger (Jeanette Samano) with a hidden agenda. With Gary Dourdan, Amanda Plummer and Lela Rochon.

(T)error (Unrated) Whistleblower featuring a former FBI informant's scathing indictment of the Bureau's use of illegal surveillance and interrogation tactics during a counterterrorism sting operation.