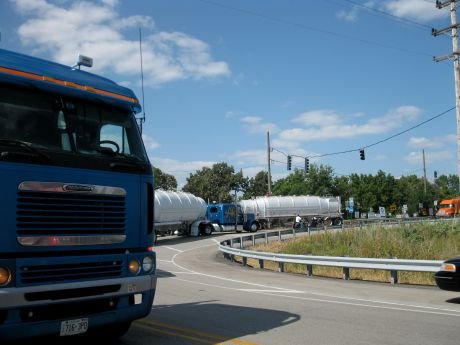 Traffic stopped on Arsenal Road as it waits to get into the CenterPoint Intermodal Center.

The weight limit for trucks traveling on Manhattan-Arsenal Road from Brandon Road east to Route 53 has been reduced from 15 tons to 5 tons by the Will County Board.

The action taken Thursday is meant to reduce truck traffic, congestion and noise on the residential county road just outside Joliet.

Resident Larry Banas, who spoke in favor of the change on behalf of more than 500 neighbors who signed a petition, said trucks do not need to use the road because alternate routes to interstates 55 and 80 and the three intermodal sites already exist.

Continuing to allow overweight trucks to travel on the road, he said, would result in a "tragedy if it continues to be used as a truck route."

"We will not rest until we get our neighborhood back," Banas told the board.

Al Gutierrez, who has lived on Sharp Road in Elwood for more than 40 years, said the issue not only requires a change in the weight limit but more police enforcement beyond just the local jurisdiction.

“We have to get police enforcement from Joliet, not just from Elwood, because a lot of the trucks are coming from CenterPoint (Intermodal),” Gutierrez said.

He added that he'd like to see the weight limit expanded to roads running perpendicular to that particular stretch of Manhattan-Arsenal Road.

Board member Ragan Freitag (R-Wilmington) said she initially was concerned about impeding the flow of commerce that the trucks carry, but that quality of life for residents takes precedence.

"This is a safety issue for the residents and the families that live there," Freitag said. “It’s not safe."

Her colleague in District 6, Don Gould (R-Shorewood), said many of the residents who signed the petition came to the board seeking help in finding a solution.

“This is the last resort for them,” said Gould.

Even with the change, the new weight limit may not have much impact since many trucks using the road are already in violation of the 15-ton limit, Director of Transportation Bruce Gould said.

Will County Sheriff Mike Kelly concurred, saying that new signs can be posted but enforcement and manpower are limited in that area.

“There are still people that are going to break the laws,” said Kelly, who noted that some truck drivers stopped for being over the weight limit come prepared.

"They know they’re overweight so they always have that money on them," he said.