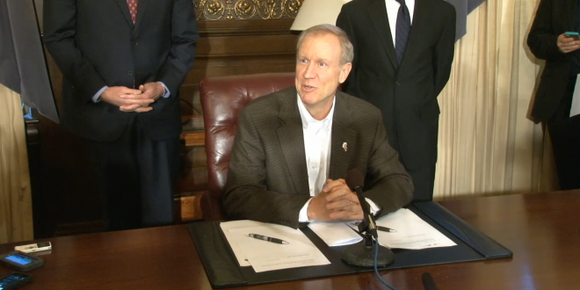 sexual assault victims seek justice. The bills include SB 3096 which creates the

Sexual Assault Incident Procedure Act. This is an overarching bill that provides

sexual assault victims with stricter protections during the evidence collection

agencies in a timely manner. It also removes barriers in the state procurement code

to allow the state to hire forensic analysts faster. This bill directly addresses

"As a state, we must do everything within our power to ensure victims are supported and that their aggressors are quickly brought to justice," said Governor Bruce Rauner. "We stand with the victims of these malicious crimes. This bill strengthens the policy behind evidence collection and gives the state tools to speed up the testing process to ensure victims have the ability to hold their aggressors

accountable and get the justice they deserve."

tested. It also specifies that hospitals must notify law enforcement agencies that

agency must take possession of the kit within 10 days. If possession does not take

place within that time period, the hospital will contact the appropriate State's

Attorney's Office. The recommendations for this bill came from the Attorney

Governor serves as their Commander-in-Chief. Discipline of National Guard service

members and military justice are under the exclusive jurisdiction of the state.

within our formations when civilian authorities elect not to pursue civilian

National Guard. "The need for this bill became very apparent as we battled military

service member before a court martial. If convicted of certain offenses before a

court martial, the Illinois National service member could face up to 10 years in

Governor Rauner also signed HB4036, which extends the coverage of the Victims'

smaller companies across the state. The bill grants employees working for an