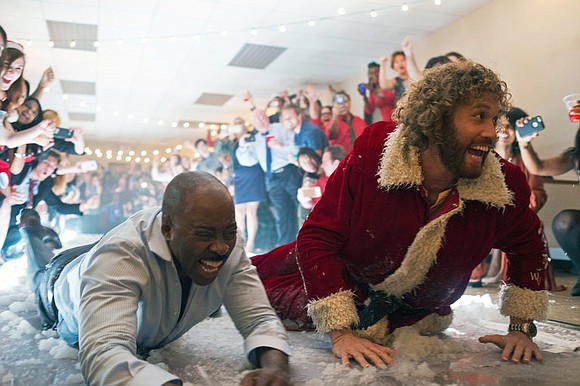 The Bounce Back (PG-13 for profanity, sexuality and brief drug use) Romantic comedy about a charismatic relationship guru (Shemar Moore) who falls in love with a skeptical fellow therapist (Nadine Velazquez) he meets while on a book tour promoting his new best seller. Supporting cast includes Bill Bellamy, Kali Hawk and Vanessa Bell Calloway.

All We Had (Unrated) Dysfunctional family drama about a cash-strapped single-mom (Katie Holmes) living hand-to-mouth with her 13 year-old daughter (Stefania Owen) until they move to a tiny town where she finds a steady job as a waitress only to be victimized by a fast-talking mortgage broker (Mark Consuelos). Featuring Eve Lindley, Richard Kind and Judy Greer.

Befikre (Unrated) Romantic comedy about a guy (Ranveer Singh) who ventures from Delhi to Paris in search of employment only to fall in love with a free-spirited Indian girl (Vaani Kapoor) born in France. With Elisa Bachir Bey, Julie Ordon and Hugo Diego Garcia. (In Hindi with subtitles)

The Brand New Testament (Unrated) Irreverent comedy about a sadistic God (Benoit Poelvoorde) living in a high-rise apartment in Brussels where he abuses both his wife (Yolande Moreau) and 10 year-old daughter (Pili Groyne). Support cast includes Francois Damiens, Catherine Deneuve and Marco Lorenzini. (In French and German with subtitles)

Burn Country (Unrated) Crime thriller about an Afghani refugee (Dominic Rains) who finds his life threatened after he takes a job as an investigative reporter with a newspaper in the quiet California town where he settles down. With James Franco, Melissa Leo and Rachel Brosnahan.

On the Map (Unrated) Inspirational documentary recounting the Cinderella story of the Israeli basketball team's unlikely win of the European Cup in 1977.

Solitary (Unrated) Prodigal Daughter drama about an unemployed, substance-abusing party girl (Katharine Lee McEwan) who moves back home to live with her aging father after getting dumped by her boyfriend. Cast includes Sam Hoare, Jana Dowling and Jack Lowe.