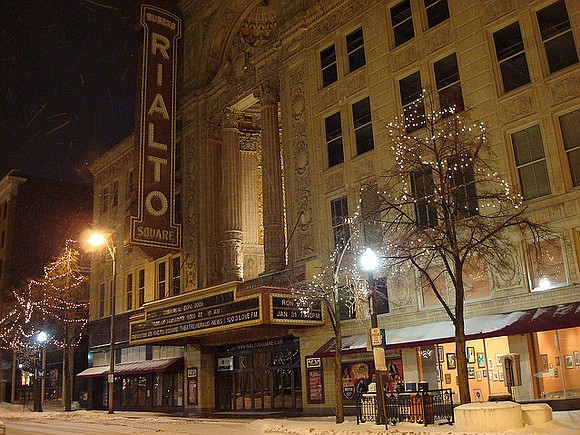 Joliet, IL. – Peace, Joy, and Happiness are often words associated with the Holiday season. As we await celebrations this year, our gatherings are sure to have one thing in common … the Rialto Square Theatre. Recent discussions have led many to believe that our 90 year old “Jewel” of Joliet and “Palace for the People” may soon feature permanent locked doors and no more flashing light bulbs. An action like this certainly cannot bring joy and happiness to anyone, regardless of which side of the discussion you fall on.

Unfortunately, peace between the Will County Metropolitan Exposition & Auditorium Authority (Rialto Board) and the Joliet City Council certainly seems like a glimmering light in the distance. Fortunately, we believe that all sides can at least agree on one thing: THE RIALTO SQUARE THEATRE MUST STAY OPEN!

About ten months ago, this Chamber wrote a letter addressed to the Governor of Illinois, Majority and Minority Leaders of both the Illinois Senate and House, and local Democrat and Republican elected officials to share our view concerning their lack of action regarding our Illinois State Budget. Our intention is for this letter to serve much the same purpose. We are not going to point fingers and say which side is right and which is wrong and won’t even go as far as to make suggestions on how a solution can come about. What we do intend to voice our opinion on is the need for both sides to come together (as often as possible) and continue discussions on ways to make this situation a positive one, one that sees a theatre that once faced demise rise once again as a cultural force in a City that once was down on its luck as well, but fought back to what it is today – a city that features numerous cultural, entertainment, economic, education, recreation, historic, and worship opportunities. A collection of hard working, proud, and knowledgeable citizens! None of us however should take pride in the fate of the Rialto Square Theatre closing.

We have a downtown plan in place that revolves around the Rialto as the centerpiece of revitalization. That plan includes finally re-opening Chicago Street and turning the corridor into a true entertainment district. We have a plan that includes demolishing a building right across from the Rialto and building a beautiful open town square park. Recent years have brought major investments from both individuals and institutions such as Joliet Junior College, the University of St. Francis, and County government. These investments all bring positive images. The same downtown plan listed the following as the most significant weakness, “the negative perception of the downtown within the community, and beyond.” Closure of the Rialto is a major negative image that may not ever be overcome.

Let’s all find a way to support a structure that drives people from near and far. We have an extremely recognizable facility listed on the National Register of Historic Places, one that is known throughout the country. Many have taken huge risks by opening their businesses and offices in downtown Joliet. We’re on the verge of seeing a new restaurant, apartments, transportation center, courthouse, and a first ever brewery in downtown Joliet. Many jobs that help pay taxes and support families rely on having the Rialto open. Many future endeavors will rely upon a thriving Rialto. Do all involved really want to be known as the leaders that let the Rialto close? Do we in the community want to be known as the generation that allowed this to happen? Our answer is no, let’s be the present day Dorothy Mavrich and Christo Dragatsis instead and find a solution to ensure our “Palace for the People” and “Jewel” of Joliet remains open. THE SHOW MUST GO ON AT THE RIALTO SQUARE THEATRE!

Sincerely on behalf of the Joliet Region Chamber of Commerce & Industry Board of Directors,