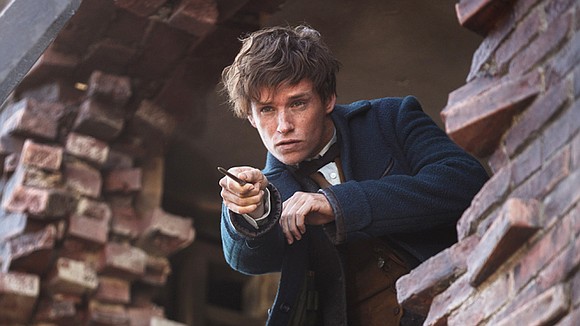 Fantastic Beasts and Where to Find Them (PG-13 for action violence) Screen adaptation of a textbook mentioned by J.K. Rowling in Harry Potter and the Philosopher's Stone, set in 1926 and chronicling the adventures of a wizard (Eddie Redmayne) who ventures from Great Britain to New York City. Support cast includes Carmen Ejogo, Johnny Depp, Zoe Kravitz, Colin Farrell, Jon Voight and Ron Perlman.

Hunter Gatherer (Unrated) Character study highlighting a recently-paroled convict's (Andre Royo) adjustment back to society without the support of his girlfriend (Ashley Wilkerson) or family members who moved on with their lives while he was behind bars. Support cast includes Kellee Stewart, Jeannetta Arnette and Trayvon Williams.

I Am Not Madame Bovary (Unrated) Battle-of-the-sexes comedy about a woman (Bingbing Fan) who sues her ex-husband (Zonghan Li) for refusing to remarry after they filed for a supposedly fake divorce in order to purchase a home reserved for singles. With Wei Fan, Tao Guo and Hua Liu. (In Mandarin with subtitles)

Life on the Line (R for violence, grisly images and brief profanity) John Travolta stars in this action thriller about the unsung electricians who risk their lives working hundreds of feet in the air to maintain the grid.

Manchester by the Sea (R for sexuality and pervasive profanity) Character-driven drama about a janitor (Casey Affleck) who becomes the guardian of his teenage nephew (Lucas Hedges) following the untimely death of his older brother (Kyle Chandler). With Gretchen Mol, Michelle Williams and Heather Burns.

Off the Rails (Unrated) Obsessive compulsive documentary about Darius McCollum, a black man suffering from Asperger's syndrome who has been arrested 32 times for impersonating engineers, conductors, track repairmen and token booth clerks in order to hijack subway trains.

Officer Downe (R for sexuality, nudity, pervasive profanity and graphic violence) Kim Coates plays the title character in this adaptation of the sci-fi comic book about a reincarnated cop who repeatedly returns from the dead every time he gets shot to patrol the mean streets of L.A. With Tyler Ross, Lauren Luna Velez and Alison Lohman.

The Take (R for violence, profanity and nudity) Action thriller about a pickpocket (Richard Madden) recruited by a CIA agent (Idris Elba) to help thwart a terrorist mission. Charlotte Le Bon, Kelly Reilly and Jose Garcia. (In English and French with subtitles)