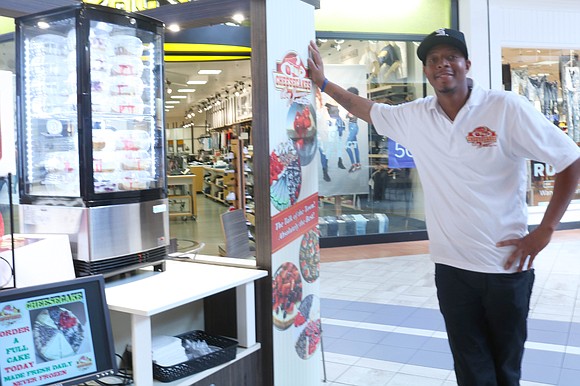 Cheesecakes by James is offering its signature tastes at a second location at the Louis Joliet Mall. Megann Horstead

New to Louis Joliet Mall, Cheesecakes by James is offering its signature tastes at a second location in Joliet.

The new business venture, launched by James Sankey, came together in July.

“This was a good move to make,” he said. “I believe it was a good chess move because being downtown Joliet for three years and waiting for traffic to be developed, you know there’s no traffic down there. If you have a good night at the Rialto [Square Theatre] or something like the music venue, The Forge, puts on, then you can get some traffic. You’re not getting the traffic, that we’re getting here at the mall.”

Sankey added, “It’s like, ‘Oh, I got this huge name that’s ringing in everyone’s circle, but no one can find me.’”

Sankey decided to be proactive rather than reactive to help his downtown area business grow. In February, he took part in the Joliet Region Chamber of Commerce’s spring expo. Sankey has also tried to promote his business by attending festivals in and around Joliet.

He said he knew he did not want for all of his effort to be for naught.

“I knew after doing that [Joliet chamber] event the next stop was the mall because all of my customers was here,” he said.

He approached management at Joliet mall and obtained information on leasing a kiosk.

“What I did was when I came here, everybody that connected with—relationships with the festivals—it’s here at the mall,” he said. “From Plainfield to Romeoville to Shorewood [to] Channahon [to] Joliet. Everyone’s here.”

From key lime to blueberry, Cheesecakes by James aims to offer a variety of flavors for people to enjoy.

The most popular cheesecakes among his patrons are the key lime and strawberry turtle flavors, Sankey said. The secret to preparing his desserts is simple.

Sankey’s first location at 20 E. Cass St. remains the headquarters for Cheesecakes by James. There, he and staff continue to do their baking on site.

At the Joliet mall, Cheesecakes by James features a select variety of his desserts for people to try.

“We [are] actually going to have all the flavors out here within the next couple weeks,” Sankey said.

His latest venture is all part of his overarching vision for Cheesecakes by James.

“Part of the plan is to keep the consistency, have multiple locations, and still keep that great quality,” he said.

He acknowledged what happens when business owners stretch themselves too thin only to lose quality or connection with the people and said that is not his intent.

“I don’t want to do that, so I start small,” he said. “I’m going to build small Cheesecakes by James store locations, but still keep the quality. This is just the beginning [with the] second location. Third location is coming.”