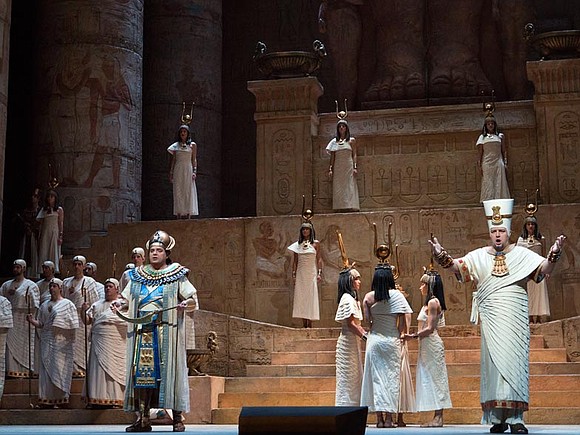 Met Opera's newest box office darling Anna Netrebko is stunning in her Met Opera debut as the long suffering Ethiopian princess Aida in the title role of Giuseppe Verdi's epic masterpiece now on the Metropolitan Opera stage through March 7 and in a MetLiveHD Encore presentation Weds Oct. 10 at 1pm and 6:30pm in selected movie theaters nationwide. Check your local listings or visit metopera.prg or fathom events.com for theatre locations and tickets.

Mezzo soprano Anita Rachvelishvili is ravishingly cruel as her nemesis Amneris, who is both Aida's slave mistress and rival for the affections of Radames, sung with faltering discomfort by Met go-to veteran Aleksandrs Antonenko (Calaf in Turandot, Otello, Don Jose in Carmen, Pollione in Norma, Grigoy in Boris Godunov, you get the idea). 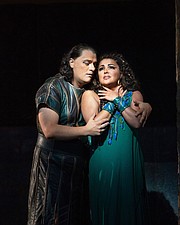 Antonenko wasn't having his best night at the Met performance of Saturday, September 29, which is reviewed here. He was obviously suffering from a bad head cold which caused him to miss all of the high notes. Especially in the grueling Celeste Aida aria right at the beginning of Act I which portended the perils ahead. Antonenko hit the final crescendo with a croak that rattled right through your teeth, even in the upper reaches of Dress Circle. It didn't get any better as the night progressed. His cold must have affected his hearing as well, because Antonenko lagged far behind his fellow singers in the ensembles, like a runner with a torn hamstring in the New York Marathon.

Anita Rachvelishvili and Anna Netrebko saved the day with an electrifying performance dripping with animosity and feline ferocity as they faced off in a duel for the affections of their joint object of affection, Radames. Sparks fly. Once Amneris tricks Aida into professing her love for Radames, its on!

Aida is in a tough position. She's the captive maid servant of the Egyptians, who enslave her Ethiopian people and are on a death-hunt for her father, the Ethiopian King Amonasro, sung with regal authority by Met stalwart Quinn Kelsey (Enrico, Count di Luna in Il Trovatore, Peter in Hansel and Gretel, Marcello and Schaunard in La Boheme, among others). Aida is torn between her loyalty to her countrymen and her love for the hero General who is their oppressor, Radames.

It all comes to a head with crushing clarity in the Second Act. The Triumphal March of Act II, is one of the grandest spectacles in all of opera and worth the four-hour sit that is an Aida performance. Horses, dancing nymphs (choreographed by Alexei Ratmansky), a succession of elaborately costumed legions (by Costume Designer Gil Wechsler), and a towering set (designed by Gianni Quaranta in a production by Emmy Award-winning Met Stage Directing veteran Sonja Frisell) all presided over under the commanding gaze of The King, sung by Ryan Speedo Green, a relative newcomer to the Met and a Graduate of the Lindemann Young Artist Development Program. Look for him in future roles as Sarastro in Die Zauberflote,, among other roles, this season at the Met. Conductor Nicola Luisotti of Tuscany, who also serves as Music Director of San Francisco Opera and is Associate Director at Madrid's Teatro Real led a spirited Met Opera orchestra. Particularly notable was the magisterial Triumphal March. Chorus Master Donald Palumbo appropriately was among the first to take curtain call bows amidst deserved ovations for the Metropolitan Opera Chorus, who were equal partners in this superb production. Through Mar 7, with varying casts live on the Met Opera stage and in Encore presentation in movie theaters nationwide Weds. Oct. 10 at 6:30pm. Visit metopera.org or fathom events.com for details.