Reviewed at the Season Premiere Oct. 4 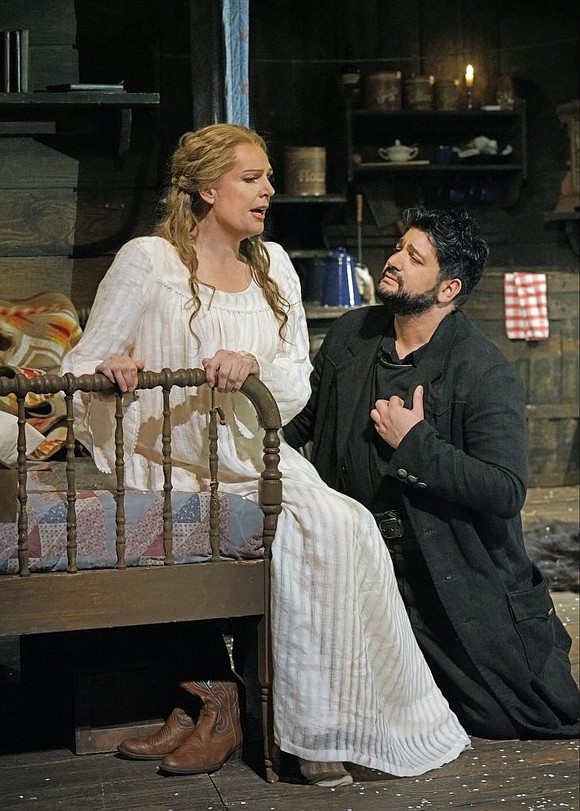 Solid singing performances propel an otherwise rather staid production of Puccini's single opera set in America's Old West, La Fanciulla del West (Girl of the Golden West). Giancarlo del Monaco's 1991 sets, depicting a Gold Rush-era town in the Sierra Foothills in 1849-50 and the cluttered staging of the supporting cast and chorus is beginning to look a bit long in the tooth. The whole production could use a fresh approach, but the dramatic tension between soprano Eva-Maria Westbroek as Minnie, the gun-toting ingenue and tenor Yusif Eyvazov as Dick Johnson, her ardent suitor, was enough to keep the audience riveted in their seats.

The vaunted Jonas Kaufmann has now assumed the role of Johnson and will most likely perform in the Live HD transmission barring any unforeseen circumstances. The tenor has been absent from the operatic stage of late for unspecified reasons that have sparked rumors among opera lovers worldwide. The source of Puccini's inspiration was the American Broadway play Girl of the Golden West, written and produced by American impresario David Belasco, who also authored Madama Butterfly, which Puccini adapted before Fanciulla. That explains the somewhat methodical transitions from one plot point to the next. There's plenty of busy-ness on stage as the action moves from a cluttered mining town to cavernous sawdust floored saloon and its barroom brawls and guns-drawn card games. The supporting cast keept things along. Michael Todd Simpson was impressive as Sonora. Carlo Bosi was convincing as the good-natured barkeep and Matthew Rose was exemplary as the hard-bitten Wells Fargo agent. Once again,Chorus Master Donald Palumbo marshaled the full force of his massive vocal ensemble into a well-oiled machine. Marco Armiliato led a spirited Met Opera orchestra, revealing the full of range of tonal color and contrast in Puccini's illustrious score. Live onstage at the Metropolitan Opera House, Lincoln Center NYC thru Oct. 27 and Live in HD in movie theaters worldwide Saturday, Oct. 27 at 1pm ET. Check metopera.org or fathom events.com for details.