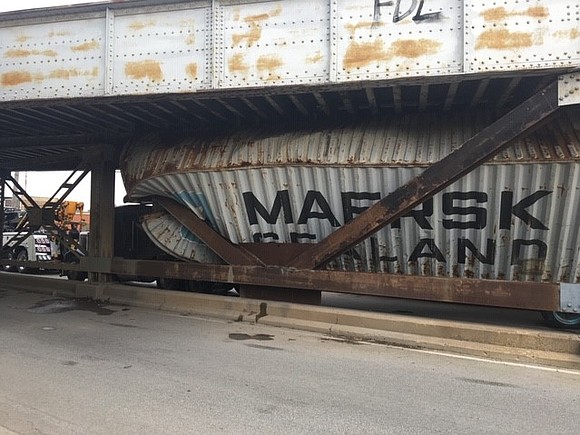 "While the majority of semi-truck drivers are safe and observant operators, Joliet is taking a serious stance on those drivers who do not take time to map routes through Joliet correctly or who haul loads that are not suited for the route chosen. The safety of our residents and preservation of our infrastructure and roadways are top priorities for Joliet," said Interim Police Chief Al Roechner.

The Joliet Police traffic unit currently has three full-time patrol officers who monitor overweight/oversize violations for trucks that travel through Joliet. All officers with this unit are certified with the Illinois Truck Enforcement Association and issue overweight/oversize citations on a daily basis. The truck enforcement patrol began in August 2017 and in only 14 months has written citations totaling over $2.2 million in bond. It is anticipated that the City will expand the Joliet Police traffic unit with more truck enforcement officers in the near future.

The Joliet Police truck enforcement patrol are able to enforce regulations throughout Joliet because the City Council have defined and passed strict truck ordinances that come with hefty fines for violators. Operation of a vehicle over the maximum weight on specified roadways range from $500.00 for an ordinance/sign violations to upwards of $30,000.00+ for state violations.

The City Council also passed a strict road blockage ordinance for trucks. "Since passage of the road blockage ordinance several years ago, we have seen an 80% drop in road blockages," commented traffic Sgt. Phil Stice. "We count on the fact that these drivers are in communication with one another and that word has gotten out that Joliet takes road blockages, due to poor planning, very seriously. Truck drivers in Joliet are learning quickly to plan their route ahead of time or else there will be consequences."

Drivers of commercial vehicles are encouraged to use the City's online Overweight jolietpolice.org provided by www.oxcart.com to ensure a compliant passage through Joliet. This permit system allows drivers to plot a safe route, pay fees, and download the necessary permits quickly and easily. Until 2015, the City did not have an overweight/oversize permit fee.

"Joliet fully recognizes the increase in semi-traffic over the last several years and that it is unlikely to diminish in the near future," said Mayor Bob O'Dekirk. "Therefore we see the merit in increased patrol efforts combined with effective ordinances and permitting measures. With these safeguards in place, Joliet can maintain its status as a hub for commerce and industry without compromising its resident's safety and quality of life."