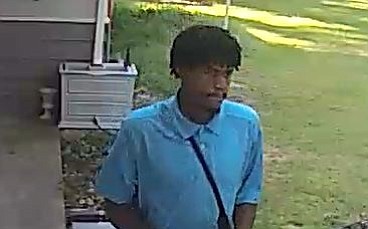 The Will County Sheriff's Office is seeking the public's help in identifying an individual who is going door-to-door impersonating a cleaning product salesman. The individual is knocking on doors to see if resident’s are home. If the resident answers the door, he begins to engage them in conversation regarding a cleaning spray he is selling. If no one answers the door, the individual is stealing packages and checking for unlocked vehicle doors.

In a reported incident on 9/14/18, a homeowner contacted the Sheriff's Office to share a security video that showed the individual approach the front door, steal two packages that had been delivered earlier that day, and leave the residence. The individual was observed with a spray bottle. This incident occurred on the 2400 block of Chevy Chase Drive in Plainfield Township.

The following day, 9/15/2018, on Lockner Blvd. in Joliet, the same individual knocked on the door and spoke with the homeowner outside on the front porch. The individual spoke to the homeowner about selling him the cleaning spray. When the man left the residence, the homeowner realized his cell phone was missing from a table he had set it on.

A third incident was reported on Golfview Drive in Joliet with the same individual approaching a residence with cleaning spray.

Sheriff’s detectives have also been informed by Midlothian Police that they believe the same individual was committing these types of thefts in their jurisdiction in early September.

The individual is described as a male, black, in his 20’s, about 6ft. tall, and 180 lbs. The subject has tattoos on his forearms. Sheriff’s detectives are asking the public to help identify this individual and if they have any information to please contact Detective Beckman at 815-727-8574 ext: 4933.