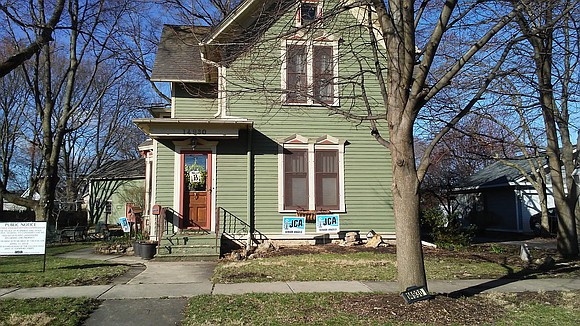 A house in downtown Plainfield is getting the highest honor possible.

The Plainfield Historic Preservation Commission at Thursday's meeting nominated the house at 14930 S. Illinois St. for landmark status. The commission's recommendation will be forwarded to the Plainfield Village Board for final approval, possibly at its Monday, May 6 meeting.

The historic commission only makes recommendations to the elected village board as members serve in an advisory capacity.

Yuchen Ding, associate planner for the Village of Plainfield, said the house is nominated for landmark designation based on several factors, including its character, interest or value contributing to the community's heritage; architectural significance; having an owner who contributed to the development of the village; and is suitable for preservation and restoration.

Ding said the house dates back to the 1800s as one of its owner at the time was a prominent veteran of the Civil War and farmer who lived on the property with his two wives. Elisha Brown also added a two-story addition to the west façade.

"The residence ... is an excellent example of a late 19th Century residence and has an addition that is difficult to discern," Ding said. "The addition blends seamlessly with the original house and both portions are historic. The current owners are only the fifth family to have lived in this 135-year-old house, which has stood the test of time and still looks much like it did at the begging of the last century."

Historic preservation commissioner Suzanne Derrick could not agree more with Ding's assessment of the landmark selection.

"I think it is a great nomination," said Derrick, adding she wants to make sure the house's architectural details will be preserved in the future.

Likewise, Jeannine Piniero, who lives near the Illinois Street home, is happy to see the "beautiful" house in her neighborhood get the recognition it deserves.

"I grew up in La Grange, so I know the value of historic homes," she said. "When my family moved to Plainfield five years ago, we didn't want to move to one of the new subdivisions because they don't have any character. These older homes, like in our downtown, add so much aesthetics to the area. It is not your typical cookie-cutter home."