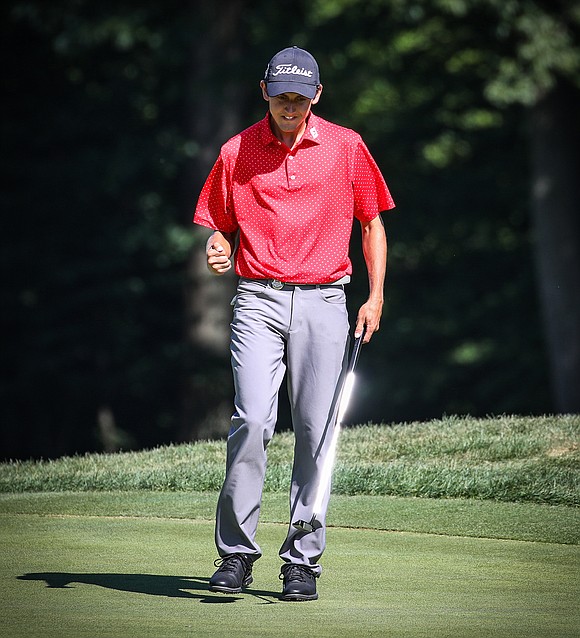 Daniel Wetterich celebrates after sinking a 10-foot, downhill putt on the 17th hole Friday afternoon to win his semifinal match, 2 and 1, against Frankie Capan at the 2019 Western Amateur at Point O' Woods Golf & Country Club. Photo by Charles Cherney/WGA.

It didn’t matter that Ricky Castillo, of Yorba Linda, California, came close to the course record at Point O’ Woods Golf & Country Club on Friday. He still needed all 18 holes to beat Eric Bae, of Pinehurst, North Carolina, in the quarterfinals of the 117th Western Amateur.

A Sweet 16 rookie, Castillo earned a 1-up win over Bae with a birdie — his eighth — on No. 18 to advance to the semifinals in his second tournament appearance. Castillo shot an unofficial 62, and the two combined for 15 birdies.

“It’s a lot of fun when two opponents are playing well, and you know you have to hit a good shot or make a putt,” said Castillo, who will be a freshman at Florida. “It was tough, but it was great. We went back and forth the entire day.”

Castillo will face Daniel Wetterich, of Cincinnati, Ohio, on Saturday morning. A graduate of Ohio State in the spring, Wetterich defeated Frankie Capan, of Phoenix, Arizona, 2 and 1.

The other semifinal match will feature Arizona senior David Laskin, of Elk Grove, California, and 31-year-old Garrett Rank, of Ontario, Canada. In the afternoon quarterfinals, Laskin beat medalist Davis Thompson, of Saint Simons Island, Georgia, 2 and 1, and Rank earned a 2 and 1 victory over Turk Pettit, of Auburn, Alabama.

All four semifinalists made the Sweet 16 for the first time.

“This is pretty surreal,” said Rank, whose full-time job is as an NHL referee. “I’m super thrilled to go this far. I know I have it in me to compete against these guys, and I’m just riding the wave of momentum right now.”

Laskin took down two quality opponents Friday, beating Quade Cummins, of Weatherford, Oklahoma, 2 and 1 before knocking off Thompson. Cummins came into this week off of a victory at the Pacific Coast Amateur.

“I knew I would have my work cut out for me,” Laskin said.

Laskin started strong in his quarterfinal match against Thompson, staking himself to a 2-up lead after three holes. He carried that advantage into No. 12, but he lost consecutive holes to even the match. Laskin bounced back with a par at the 14th to go 1 up and added another par at No. 16 to lead 2 up.

“We weren't playing amazing golf, but I did what I had to do to win holes,” he said. “It’s about whoever hits the right shots at the right time.”

Rank was 3 down through six and 2 down through 11 to Pettit before rallying to tie the match by winning Nos. 12-13. He made back-to-back birdies at Nos. 15-16 to go 2 up before closing out the match with par on the 17th.