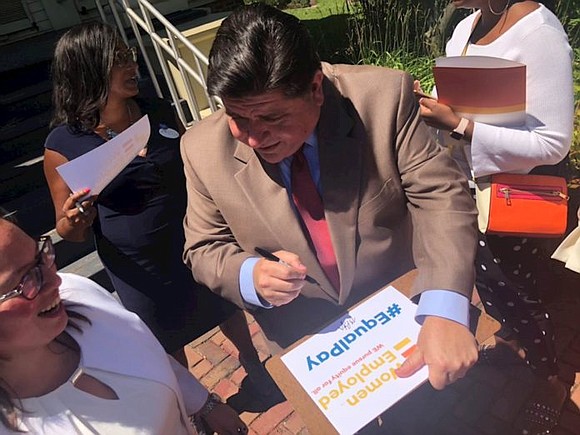 Gov. J.B. Pritzker signed bills into law Wednesday aimed at equalizing pay between men and women and expanding access to jobs in the health care industry for people in the criminal justice system.

“In 2019, women in Illinois still make roughly 20 percent less than their male counterparts, and for women of color the disparities are even greater,” Rep. Anna Moeller, an Elgin Democrat and the bill’s House sponsor, said in a statement. “HB 834 is aimed at closing that wage gap. It ends the pernicious practice of using prior wages to determine future pay, and increases the penalties on companies and organizations that utilize discriminatory pay practices.”

“Less than a block from here sits the headquarters of the United States Soccer Federation, an organization that just this week defended a different kind of decision: To compensate its female players at lower rates than the men despite their substantially higher success rate – an act so questionable that the men’s team itself declared the justification inequitable and unfair,” Pritzker said in a statement. “Here in Illinois, we know that women get the job done. It’s time to pay them accordingly.”

The new law will take effect in 60 days and will also prohibit employers from preventing employees from discussing their salary, benefits or other compensation with colleagues.

While the bill prevents a potential employer from seeking salary and benefit history from a previous employer, there are some exceptions. It does not prevent an employer from looking up a salary that is a matter of public record or available through the Freedom of Information Act, and it does not apply if an applicant is a current employee seeking another job within the same company.

If an applicant voluntarily discloses their salary or benefits history, an employer is not in violation of the law unless that information is used as a factor in determining whether to hire the person or determine their future wages.

If an employer violates the salary history provisions, the applicant may be eligible for up to $10,000 in damages and other fee reimbursements through civil litigation. Any legal action must be brought within five years of the alleged offense.

Pritzker also signed Senate Bill 1965 on Tuesday, expanding access to jobs in the health care industry for people with arrest or conviction records.

Currently, people with arrest or conviction records for certain kinds of crimes are barred from working in a number of health care fields unless the employer seeks a waiver from the Department of Public Health. That can happen only after the employer makes a conditional job offer and requests a fingerprint-based background check.

Among other things, it allows certain workforce “intermediaries” who provide job training as well as organizations providing pro bono legal services to initiate the background check process. It also allows people with disqualifying records to apply for waivers before they are extended a job offer.

“Over 4 million Illinoisans have an arrest or conviction record – that includes over 40 percent of our working age population,” Pritzker said in a statement. “This vicious cycle of poverty, crime and injustice – which disproportionately impacts communities of color – does a disservice to everyone involved, from affected families to employers to taxpayers. I’m so proud that this legislation will dismantle another part of the wall that blocks people with records from living a dignified life.”