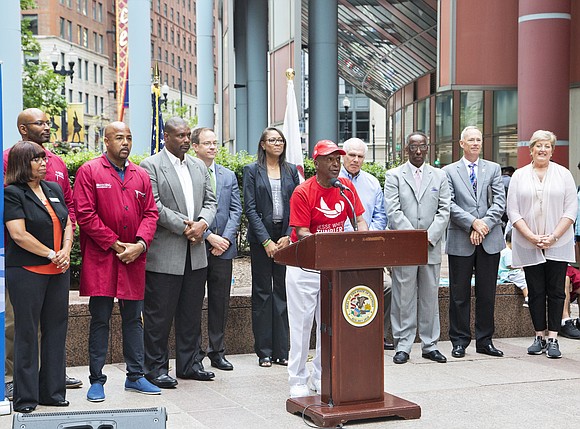 “We are working together to end the wait for those in need of organ donation,” said White. “Unfortunately, minorities are in great need of organ transplants, yet they donate at a lower rate. I encourage everyone to register to become an organ/tissue donor to help give the gift of life to someone in need.”

Nationally, people of color comprise 59 percent of the waiting list for organ transplants; however, this year they accounted for only 33 percent of those who donated organs, according to the Organ Procurement and Transplantation Network.

According to the Organ Procurement and Transplantation Network:

In Illinois, 6.7 million people are registered as organ/tissue donors, yet there are approximately 4,700 people waiting for transplants. People of color are disproportionately affected by illnesses such as hypertension and diabetes, which can lead to the need for dialysis or a kidney transplant, increasing the number of patients on the organ transplant waiting list, according to United Network for Organ Sharing. On Jan. 1, 2018 a new law spearheaded by White went into effect allowing 16- and 17-year-olds to register to become organ/tissue donors. To date, more than 70,000 teens have registered.

Dozens of volunteers participated in the event, which was held on the plaza of the James R. Thompson Center in recognition of the awareness week, August 1-7. Vicki Walker, a donor mom, spoke at the event along with Kim Gosell, a three-time kidney recipient and Freddy Perez, a heart recipient. A registration table was available at the “Wave Away the Waiting” event for people to join the Secretary of State’s Organ/Tissue Donor Registry. The Jesse White Tumbling Team also performed.

Illinoisans can register with the Secretary of State’s Organ/Tissue Donor Registry online at LifeGoesOn.com, by calling 1-800-210-2106 or by visiting their local Driver Services facility.