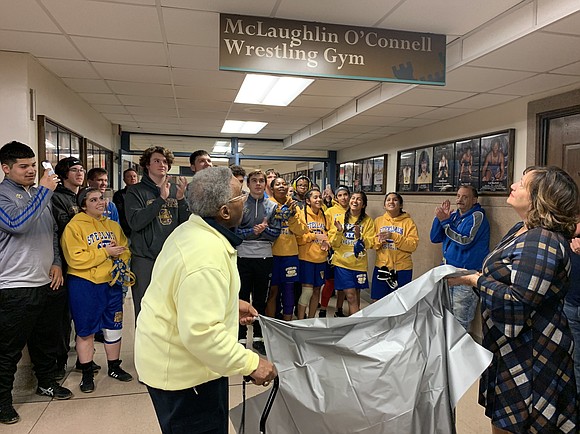 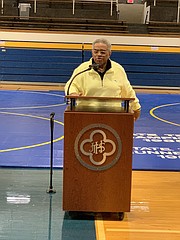 "It seems fitting to name the wrestling room after two individuals that spent so much time in helping to shape and inspire young athletes over the past 35 plus years," said Director of Support Services Brian Shaw who is a Steelmen wrestling alumnus and former coach.

Coach Mac began his teaching and coaching career at Joliet Central in 1966. He took over as the head wrestling coach in 1970 and held that title until 2010 (40 years) when he retired as a dean of students and head wrestling coach. Mac stayed on to coach lower level wrestling teams at Joliet Central an additional seven years before officially retiring again. During his tenure, Coach Mac:

Coach Pat O'Connell started his wrestling career at Joliet East High School in 1970 as a student where he was a three-year varsity letterman. Pat went on to Millikin University where he was a four-year varsity letterman and CCIW place winner at 142lbs. in 1977. Upon graduation, Pat returned to Joliet East as an assistant wrestling coach with then head coach Sam Parker. When Joliet East closed in 1983, Pat moved to Joliet Central where he coached wrestling until 2018 (35 years). Pat served as Coach Mac's assistant for 27 of those years. During Pat's tenure, he helped coach 74 state qualifiers, 26 state place winners including two individual state champions. Pat also served as an assistant coach on the 1985 State Championship team and the 1986 State Runner-up Team. Pat served as the head wrestling coach at Joliet Central from 2010-2013. In 2018, Pat O'Connell was inducted into the Illinois Wrestling Coaches and Officials Association Hall of Fame.

"Coach Mac McLaughlin and Pat O'Connell have excelled as wrestling coaches, mentors, role models and dedicated their lives to working with the student athletes at Joliet Central and the Joliet Community," said Shaw. "Having wrestled for both men during my scholastic career at Joliet Central, I can speak to their passion about wrestling and more importantly, their passion for helping student athletes reach their full potential no matter what their talent or skill level was. Both men have done amazing things during their lives both on and off the mat. It is truly fitting that we honor these two men tonight and dedicate the space in their name where they impacted so many."