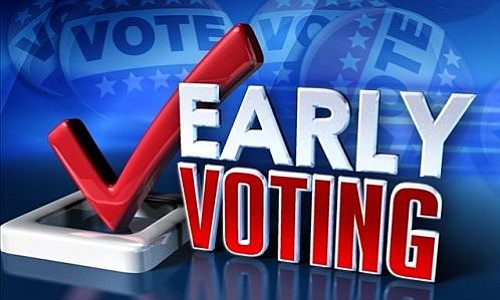 The County Clerk is pleased to announce that Shorewood Village Hall is coming on board as a new location for Early Voting in the April Election.

In addition, Fountaindale Public Library in Bolingbrook, which already is an Early Voting location, has agreed to expand its hours to include weekends and evenings during the Early Voting period.

Early Voting at these locations begins on March 18.

Shorewood Village Hall, One Towne Center Blvd., will be open for Early Voting between the hours of 8:30 a.m. and noon, Monday through Friday between March 18 and 29. During this election, the location will serve only Shorewood residents.

Fountaindale Public Library, 300 W. Briarcliff Road, Bolingbrook, with its expanded hours, will now be open from:

"I made a promise to the citizens of Will County to expand locations for Early Voting, and I am so glad to bring the Village of Shorewood on board," Staley Ferry said. "I am also thankful that the Fountaindale Public Library leadership didn't hesitate a moment when my team asked them to expand their hours to include weekends and evenings. Historically, the County Clerk's Office has only requested weekday business hours for the library during Consolidated Elections."

The County Clerk also is involved in discussions to increase Early Voting locations in Eastern Will County and on Joliet's East Side for what is certain to be a high-volume General Election in 2020.

"We are talking with several entities and agencies to further expand Early Voting options for the Presidential Election in 2020 in areas that have been underserved," Staley Ferry said. "Everyone must have convenient access to Early Voting sites for our democracy to thrive."

Shorewood Village Hall and Fountaindale Public Library are two of 20 locations that will open their doors for Early Voting on March 18. For a complete list of Early Voting sites and hours of operation, visit online at thewillcountyclerk.com.