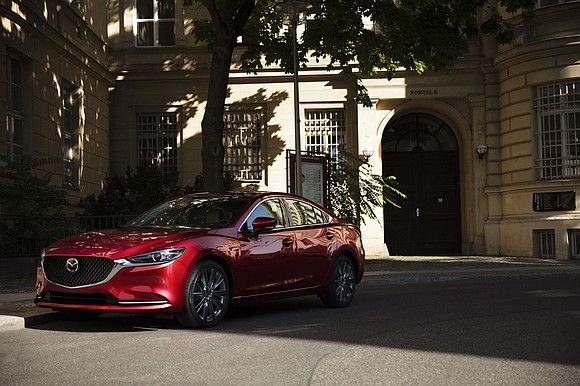 In a shrinking market for cars, automakers are doing everything they can to keep consumers interested in sedans and coupes. At Mazda that meant making i-Activsense safety and diver assisting technologies standard across all trim levels.

We had the top of the line Signature trim line and it came with a lot of equipment. Under the hood was a 2.5-liter turbocharged four-cylinder engine that made 227 horsepower and 310 pound-feet of torque.

Cylinder-deactivation technology is standard on Mazda6’s 2.5-liter engine, which shuts off its two outside cylinders in cruising conditions for even more efficiency.

The engine was mated to a six-speed automatic transmission. The midsize sedan got 23 mpg in the city, 31 mpg on the highway and 26 mpg combined. On startup, this engine sounded a little wimpy. But once we put our foot to the gas pedal all thoughts of weakness left.

The Mazda6 accelerated well. Gear shifts were precise and the midsized sedan was not overwhelmed by traffic. As a colleague of ours says, the 2019 Mazda6 was road worthy.

The cabin was quiet and the sightlines were unobstructed. The Mazda6 provided a pleasant driving experience. The only quibble we had was that for some reason the audio system had a lag time. It took a few seconds between startup and it coming on line. However, we had it set on satellite radio; that may have been the cause.

The interior was clean and without a lot of clutter. There was a floating touch screen infotainment system. The instrument panel had three large circular dials. The odometer was on the left, the speedometer was in the middle and the fuel and temperature gauge filled the third one. They all were black with white lettering.

Fit and finish were great. There was parchment stitching, which was the same color as the bottom half of the dash. It was so nicely done that it was difficult to tell whether the stitching was real.

The heated and cooled front seats provided plenty of support. The dash was soft touch, there was a moon roof and both front seats were power operated.

We’ve always said that it is the little things that can make a big difference. With the 2019 Mazda6 we thought that all four power windows being one touch up and down was a nice touch. You would be surprised how often that feature is limited to the driver’s window.

And we were really surprised by the back seat. There seemed to be no fall off. They had the same thickness as the front seats. There was plenty of head room and since the Mazda6 was front wheel drive, the tunnel didn’t seem like it was an intrusion in the interior.