“What Set Me Free” by Brian Banks (with Mark Dagostino) 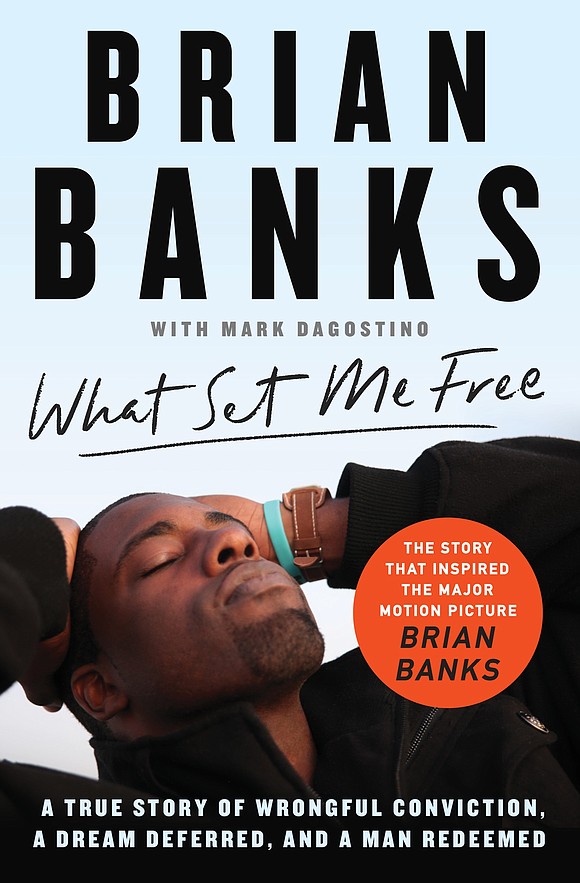 You saw it happen.

Every second of it, every sound, it’s burned in your memory. You can recall how it made you feel, how time seemed to slow down, how there was no room for anything else in your mind. It happened. Or – as in the new book “What Set Me Free” by Brian Banks (with Mark Dagostino) – did it?

His whole future was laid out in front of him.

Brian Banks was sixteen years old, popular at summer school, smart and talented with an offer to play football for USC in his pocket and his own car in the driveway. He was your typical good kid; his mother had insisted on it and he never let her down.

Still, he was a teen-age boy who was very interested in the opposite sex, so when a girl he barely knew invited him to make out with her one afternoon at school, Banks, who’d already had experience with this kind of thing, eagerly agreed. Alas, nothing happened that day; a teacher interrupted the pair and they went their separate ways.

The next morning, Banks woke up with someone’s knee in his back and guns in his face. He was torn from his bed, handcuffed, dragged from his mother’s house, and taken to jail at the Long Beach, California, precinct, where he learned why he’d been detained: the girl had accused him of rape.

But he was innocent. He knew that, lots of people saw it, and he was sure it would be easy to prove. He told his story – the truth – over and over but lawyers failed him, courts failed him, and even though the girl’s story changed, evidence was overwhelming, and DNA tests were negative, Banks went to prison.

For the next four-plus years, he worked to avoid becoming “an inmate.” He found a mentor who gave him coping tools, and he looked for a balance between fitting in and keeping to himself. Banks thought of the future, and how his had unimaginably been taken away. Anger, he learned, is easy for a man to find behind bars.

That’s doubly true when he didn’t do the crime…

Prisons, as the saying goes, are full of innocent people but in the U.S., that’s sadly been proven to be true. “What Set Me Free” is the story of one of them.

But first: yes, this is an often-told tale with elements you’ve read before but there’s a difference here, in the way the story’s told. Author Brian Banks (with Mark Dagostino) begins lightly before slamming us into that familiar tale, the body of which conveys a maddening frustration that completely carries readers along. That ultimately grows to include disorientation and a heightened bewilderment that seems as though it’s never going to let go.

But let go it does, and in a way that’ll leave you with a measure of satisfaction mixed with lingering sadness that it even occurred. Yes, “What Set Me Free” plays like that with your emotions but start it, and you’ll just happen to like it.