Hill back in his Wheelhouse at Chicagoland 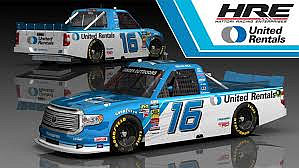 Joliet - Austin Hill, driver of the No. 16 SiriusXM Toyota Tundra Sweet Home, Chicago … Austin Hill and the No. 16 SiriusXM team return to their most comfortable environment on Friday night as the NASCAR Gander Outdoors Truck Series turns to Chicagoland Speedway. The 1.5-mile tracks have long been a point of strength over the last three years for the HRE squadron, led by crew chief Scott Zipadelli. Hill is 1-for-1 at Chicagoland in the category of top-10 finishes and looks to build on his impressive effort from Texas Motor Speedway (TMS), the most recent 1.5-mile venue where he led 34 laps late in the event. Hill aims to continue the No. 16 team’s success at Chicagoland after the team qualified on the pole and visited victory lane in the last two trips to the “Land of Lincoln”. Start Towards the Front … Not only have 1.5-mile tracks been point of pride for the No. 16 group, but qualifying has been as well in 2019.

Five of six races on 1.5-milers have had qualifying contested, and Hill has earned top-seven starting spots in four of those races. Starting towards the front has translated into racking up valuable stage points, which Hill was able to do in six of eight stages in those four races at 1.5-mile venues. He and Zipadelli will look to replicate that success at Chicagoland to jumpstart an ascent up the standings. HRE Salutes … During the NASCAR Salutes campaign, HRE will honor service members close to the team members by placing their names on the right-side door of Hill’s No. 16 Toyota Tundra. Hillwill carry the names of his great grandfathers in the final Gander Trucks race during NASCAR Salutes. Earnest Wilson, U.S. Army, and Daniel Hammock, U.S. Navy, served during World War II and were both awarded the Occupational Medal and WWII Victory Medals.

Wilson was a Private First Class in the Army and began serving in 1945 and was honorably discharged in February 1947. Hammock served from 1941-1945 and was part of the Navy Construction Battalion and honorably discharged at the endof his service. Chicagoland History … The 2018-running of the Gander Trucks at Chicagoland was one of Hill’s best efforts of last year’s campaign with Young’s Motorsports. He started 14th and tallied his third top-10 finish of the season with a ninth-place result. Friday night will be his second start on the Magnificent mile-and-a-half and looks to become the first full-time Gander Trucks driver with multiple victories this season.

Season to Date … An 11th-place result at World Wide Technology Raceway last week has Hill positioned seventh in the Gander Trucks championship standings, and second on the provisional playoff grid. In 11 events, Hill has captured one victory, two top-five, and six top-10 finishes (tied for a career-high). Chassis Selection … Ole reliable chassis No. 007 returns for another outing this weekend at Chicagoland. Hill ran this Toyota Tundra at TMS earlier this month and has raced it on three occasions this year. Chassis No. 007 has top-10 finishes in all three appearances in 2019 with a best finish of sixth at Charlotte Motor Speedway. Tune In … FOX Sports has all of Friday’s on-track action covered from Chicagoland. FS2 will carry coverage of qualifying at 5:00 p.m. ET followed by the green flag on FS1 at 9:00 p.m. ET. Stay updated with Hill and the No. 16 team by following @Hattori_Racing on Twitter, @hattoriracing on Instagram, and Hattori Racing Enterprises on Facebook. Austin Hill Quote: On returning to a 1.5-mile racetrack: “I’m ready to get back to an intermediate for sure. We were really good at Texas the other week. That truck was so fast, and with Scott (Zipadelli) and the guys bringing the same truck to Chicago, I’m really looking forward to this weekend. I feel like we’ve had a lot of speed at all the mile-and-a-half’s this year, so Friday should be another good opportunity for us with our SiriusXM Tundra.