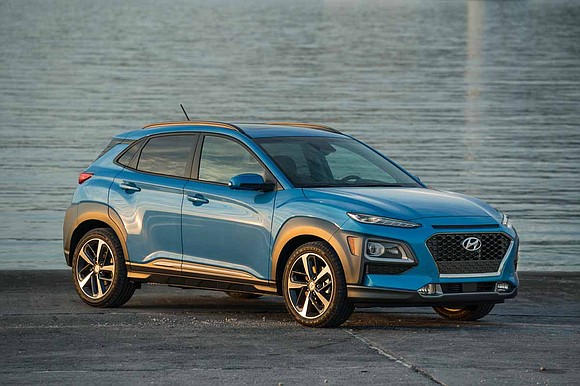 The Hyundai Kona, a subcompact crossover, has garnered all sorts of rewards since it was introduced in the 2018 model year. The crossover had love it or hate it styling which is a central feature of good design. In a word, it was distinctive.

We had the 2019 Kona Ultimate AWD model. It was the top-of-the-line model for the gasoline powered Kona. There is an all-electric version of the crossover.

The Kona featured Hyundai’s cascading grille, double headlights, LED daytime running lights above the headlamps, fog lights and halogen cornering lights. The side was sculpted with scallops and there were edgy distinctive lines while the rear roofline curved down and filled out the rear.

There was black cladding on the bottom and around the wheel wells; it looked like one piece. And the bulging shoulders of the fenders added some muscularity to the look. It made for a distinctive and aggressive design.

Under the hood was a 1.6-liter turbocharged four cylinder engine that made 175 horsepower and 195 pound-feet of torque from 1,500 to 4,500 rpm. It was mated to a seven-speed dual clutch automatic transmission.

The powertrain was the first thing we noticed about the Kona. It was quick, sporty and it had enough oomph to be respected. We just couldn’t put the pedal to the metal. In other words, the crossover had some power.

The fuel rating was 26 mpg in the city, 29 mpg on the highway and 27 mpg combined. If you want more, there is always the 2.0-liter four cylinder engine. It has less horsepower and more mileage but not much. In this case, fun outweighs fuel savings.

Practicality was the first thing we noticed when getting into the 2019 Hyundai Kona. It was a simple layout with a floating infotainment touch screen dominating the interior. The heated front seats were black, and the driver’s seat was power.

Climate controls were underneath the screen and there was sort of a cove beneath those controls. In that cove was the wireless charger, two USB chargers and a 12V charger.

This Kona had a smart key, normal and sport driving modes, a navigation system and all-wheel-drive. There was a head-up-display system, lane keep warning, blind spot warning and the rearview camera had cross traffic alert.

One feature we’ve always found intriguing is that the Hyundai Kona’s all-wheel-drive system could be locked into four-wheel-drive. There were two drive modes: sport and normal.

We stayed in normal for most of the drive. The ride was firm without being harsh. The Kona cornered well, it had a small foot print; the overall length was only 164 inches. It was evidently made with urban driving in mind. The small but turbocharged engine provided enough pep for the average day-to-day requirement of city driving. And the crossover cruised well at Interstate speeds; there was not a lot of bumping and little to no wind buffeting which is important in a vehicle this size.

We climbed into the back seats and found them firm, almost hard but not quite. There was enough headroom but it was close. Legroom depended on how far back the front seats were articulated. The one trait we found disappointing was there were no connectivity ports for back seat passengers.