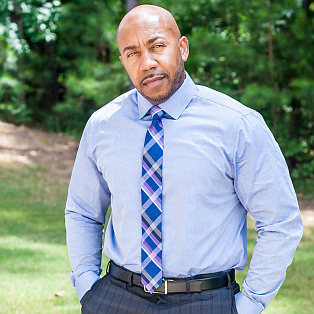 When Joliet Central High School alumnus Lishers Mahone III first began his career at the car-rental company Enterprise nearly 20 years ago, he could not have imagined the amazing work he is doing now, leading the Atlanta Entertainment Division on behalf of Enterprise Holdings Inc.

Lishers Mahone III is the son of the late Rev. Lishers Mahone Jr., a prominent local pastor, and Betty Mahone, a retired Joliet Central High School teacher. His parents instilled in him the values of hard work, love for community, and the power of education. In addition, his success can be attributed to his emphasis on continual learning, authentic relationship building, and innovative leadership.

The jumpstart to his new career leading the Atlanta Enterprise Entertainment Division occurred nearly 10 years ago when the movie “Hall Pass” was being filmed in metro Atlanta in 2010. At this time, Mahone was a Branch Manager. When the movie director came in to rent a sedan for a VIP member of “Hall Pass,” Lishers was not satisfied with the company’s selection of a Chevy HHR. Lishers took matters into his own hands and contacted the Production Manager to tell her how he felt about the car selection. Due to that personal connection, Lishers was able to provide a different vehicle to the movie director and maintain a positive relationship between Enterprise and the movie production.

At this moment, Lishers pitched the idea of a Georgia-based Enterprise Entertainment Division to company leadership because film and television production in Atlanta was increasing at this time. Not only did the idea get approved, the same movie director from “Hall Pass” spread Lishers’ name to other film and television producers and directors and became a vital, trusted source due to the way Lishers provided excellent customer service. This greatly increased Enterprise’s business.

In 2010, “Fast and Furious 5” came to Atlanta and the cast and crew rented 150 vehicles within 8 months. Lishers realized that it was time to have their own, separated branch location, the Atlanta Entertainment Division. “It has been amazing to watch the business grow,” he says. “I’m proud to say we are a key business partner to the Georgia Film Industry. It’s a true reflection of the team and their dedication.”

This opportunity was just the start of a brand new career for Lishers. Thanks to him, Enterprise Entertainment has provided vehicles to multiple Georgia-based productions that includes “Stranger Things,” “Hunger Games,” “Fast & Furious,” “Baby Driver,” and “Avengers: Endgame.” Not only has their partnerships expanded, the Atlanta Entertainment Division now has three locations, including a truck division focusing on purpose-build production trucks and passenger vans.

Lishers does not hesitate to create an opportunity. Although Lishers grew up in Joliet, he also considers himself a Georgian for having spent more than half his life in the state of Georgia since starting at Morehouse College in 1994 and graduating in 1998. “We are all about creating opportunities,” says Lishers. “Everybody on our team here is a Georgian — that matters.”