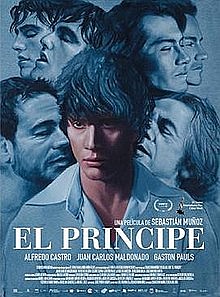 THE PRINCE (EL PRINCIPE) is a dark, raw film by Chilean director Sebastian Munoz that takes us directly into the harsh life behind bars in the notorious San Bernardo prison outside Santiago, Chile. The time is around 1970, prior to the rise of Salvador Allende to power. The film is deeply disturbing, not just because of its homoeroticism, sexual and temporal violence, but because of its unvarnished depiction of prison life and culture, which all pervasive. Those involved in today’s prison reform movement need to take a long and hard look at this film. The Prince tells the story of young Jaime, who is sent away for killing his sometime lover in a crime of passion after a night out of drinking. He is given the nickname, The Prince by jail yard boss “The Stallion” (veteran actor Alfredo Castro of From Afar and The Club, who is also a dead ringer for a middle-aged Al Pacino). He becomes Jaime’s mentor and eventual lover. That is, after he humiliates and then rapes him. (The Stallion later gets his comeuppance from prison guards in a grossly violent scene that will force you to close your eyes). Yet beneath this primal surface there exists a tale of loyalty love and compassion that blooms even in the most horrific of circumstance. The film had its World Premiere at the 2019 Venice International Film Festival where it won the prestigious Queer Lion Prize and screened at the 55th Chicago Film Festival in the Cinemas of the Americas, Global Currents and Out-Look Competition.