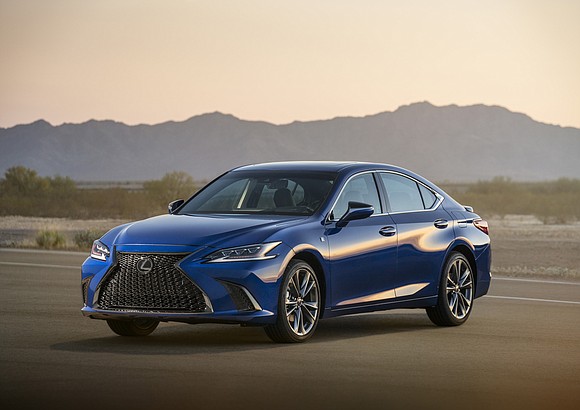 Let’s face it, the original Lexus ES luxury sedan was designed to not offend anybody. That means from a design standpoint, the luxury sedan didn’t appeal to anybody. But all that has changed.

We don’t know that any nameplate in Lexus’ lineup has benefitted more from the brand’s style change fueled by the adoption of the spindle grille. These days you love or hate the new Lexus look. From the street reaction, most folks we ran across while test driving the new 2019 ES 350 were all in favor of the new style.

The front-wheel-drive sedan used an all-new platform that lowered and widened its stance, and made it longer too. The wheels had been pushed closer to the corners than ES models before it. For the first time in its seven generations, designers used a flat roof to lower the stance even more and provide for better aerodynamics.

Lexus said thanks to a two-inch longer wheelbase and wider tracks front and rear and enhanced the 2019 ES 350’s ride and its performance capabilities. The ES’ spindle grille had a vertical pattern and satin plated trim. That theme is repeated at each corner of the bumper to give the ES a wide, planted look.

From the side, the ES350 had a low hood line; the roofline remained low and sleek thanks to what Lexus called relaxed A-pillars that flowed smoothly to the sharply slanted C pillars. A long, uninterrupted shoulder line that extended from the top of the front wheel arch all the way to the corner of the trunk served as a contrast to the smooth arc of the roofline and gave the ES a refined sense of sportiness. On more than one occasion onlookers stopped for a second peek at the car, some asked what kind of car it was. That is how much the 2019 ES 350 has changed.

The car had LED tail lamps wrapped around the quarter panels to provide a continuous style line from any angle. The lights featured a distinctive three-dimensional, L- shaped design. The side of the ES was integrated into the rear end by drawing the shoulder and bumper corner lines into the point at the inner edge of each taillight.

Finishing off the rear end is a lower valence that highlights the wide stance through the use of chrome exhaust finishers at each corner. On the F SPORT model, a trunk lid spoiler adds a tasteful hint of performance while dark accents along the taillights and lower valance are more subtle indications of its sporting nature.

Under the hood was a 3.5-liter V6 that was both direct and port injected. It made 302 horsepower and 267 pound-feet of torque. The engine was mated to a direct shift eight-speed automatic transmission.

This combination provided more than enough power. The 2019 ES350 had plenty of oomph for those burst of speed needed on expressways and it could cruise at speeds that would incur the wrath of authorities effortlessly.