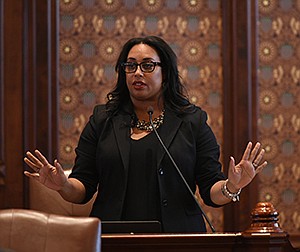 The resolution highlights Hutchinson's legislative accomplishments and reputation as a highly effective and well-regarded public servant throughout her career in the General Assembly.

"Serving the people of District 40 has been the honor of my lifetime," Hutchinson said. "I'm proud of the progress we made over the past decade to advance justice and equity in this state and I look forward to carrying those principles into the next chapter of my career serving the people of Illinois."

Since 2009, Hutchinson has served as Illinois State Senator for Cookhttps://statisticalatlas.com/county/Illinois/Cook-County/Overview, Grundyhttps://statisticalatlas.com/county/Illinois/Grundy-County/Overview, Kankakee and Will Counties, representing a mix of suburban and rural communities south of Chicago. Hutchinson is also the immediate past President of the National Conference of State Legislatures (NCSL), a bipartisan non-governmental organization that serves both members of state legislatures and staff.

In her new role, Hutchinson will oversee Illinois' new recreational cannabis program, an initiative she helped move through the Senate during the 2019 General Assembly.

"While Senator Hutchinson's departure will be a profound loss for the Illinois Senate, I congratulate her on her new role and wish her nothing but the best as she continues to serve the residents of Illinois," Senate President John Cullerton said.

Hutchinson's most distinguishable legislative achievements include:

However, Hutchinson's most cherished role is being a wife to her husband Paul and mother to her three children, Paul Jr., Camryn, and Ryan.