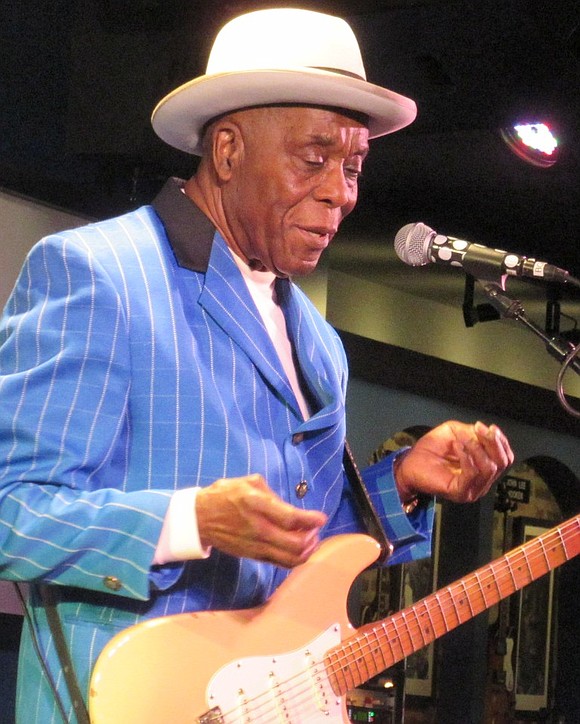 Announcement Comes Alongside the Unveiling of the Festival’s Full Lineup, Including More Than 150 Films from Around the World

Mimi Plauché, Artistic Director of the Chicago International Film Festival, today announced at the annual press breakfast that the 55th edition of the Festival will close with the world premiere of Jim Farrell’s Buddy Guy documentary, The Torch. Chronicling legendary blues musician Buddy Guy’s dedication to mentoring a new generation of artists, the screening event will begin at 6 p.m. on October 27 at AMC River East 21 (322 E. Illinois St.). An after-party will follow the screening at Steak 48 (615 N Wabash Ave) at 8:30 p.m. Presented by Cinema/Chicago, the 55th Chicago International Film Festival will take place October 16 – 27 at the AMC River East. Farrell, Buddy Guy and producer Amy Briamonte are scheduled to attend the event.

In addition to the Closing Night announcement, Plauché and the programming team, comprised of Anthony Kaufman, Alissa Simon and Sam Flancher, unveiled the Festival’s full lineup of competition and special presentation features and short films.

“Buddy Guy is a timeless Chicago icon, and we are honored to close the 55th Chicago International Film Festival with this celebration of his talent and his commitment to the enduring legacy of blues as an essential American art form,” said Plauché.

“Each year, we showcase the best films made in Chicago and Illinois,” said Kaufman. “From portraits of Chicago legends to stories of horror, coming-of-age, and even an avant-garde look at contemporary China, this edition of the City & State program is one of our most impressive and expansive.”

Featuring more than 150 films from around the world as well as appearances from top directors, producers, actors, designers, and more, the 55th Chicago International Film Festival continues to be the premier destination for film enthusiasts and experts alike. The longest running competitive film festival in North America, the Chicago International Film Festival is committed to selecting the world’s most exciting, compelling and groundbreaking feature films, documentaries and short films, including multiple Oscar contenders and winners, year after year. For the past five years, the Festival has been proud to showcase the Academy Award Winner for Best Picture.

At 83, Chicago legend Buddy Guy remains the standard bearer for the blues, an icon determined to see the art form live on long after he’s gone. Enter guitar phenom Quinn Sullivan, who has been mentored by Guy since he was a kid. This stirring documentary, amplified by electrifying musical performances, charts the guidance Guy himself received from the likes of Muddy Waters and John Lee Hooker while observing the 8-time Grammy®-winner passing his wisdom to the next generation. Released by IFC Films. 107 min.

Chicago 1969: Activists from the Black Panthers, Young Lords, and Young Patriots united African Americans, Latinos, and poor whites to confront police brutality and unfair housing in one of America’s most segregated cities. A timely story of collective action, The First Rainbow Coalition tells this little-known chronicle of political struggle with you-are-there intensity through archival footage and interviews with those who lived it. 56 min. With post-screening discussion.

Home improvement can be horrible—but for Don (CM Punk), a tattooed dad-to-be fixing up his newly acquired turn-of-the-century Victorian, they can be downright gruesome. With his wife away, Don tries to clean up his own act and the decaying drywall, but the house has other plans. With a bounty of blood-splattering body-horror, Girl on the Third Floor is a supernatural skin-crawler about how things left to rot can come back to haunt you. 93 min.

The film follows seventeen-year old Hala, played by Geraldine Viswanathan (Blockers), as she navigates her senior year of high school and starts to develop feelings for her classmate. Raised in a conservative Muslim Chicagoland household, her growing attraction is at odds with her traditional upbringing. At the same time, she finds herself grappling with the knowledge of a secret that threatens to unravel her family. 94 min.

In this mystical Twin Peaks-ian teen noir, the disappearance of a high school student points to dark forces at work in a sleepy Illinois town. Although friends, neighbors, and family search for Carolyn Harper, the case remains unsolved. Unmoored and adrift, the rural community—from the mother of the missing girl to her fellow choir members—tries to soldier on. Surreal, sly, and shocking, Jennifer Reeder’s coming-of-age tale has a fiercely feminist heart. 111 min.

When radical Hungarian artist László Moholy-Nagy moved to Chicago in 1937, he spearheaded “The New Bauhaus,” a movement descended from the famous German school; Moholy-Nagy took a pioneering interdisciplinary mixed-media approach to art and design that was vastly ahead of its time. Featuring interviews with Moholy-Nagy’s daughter and a range of experts, The New Bauhaus offers an illuminating portrait of the work of a visionary teacher and thinker. 89 min.

After her father’s violent death, Native American teenager Margo Crane flees down Michigan’s Stark River in search of her estranged mother. On the way, she encounters allies, enemies, danger, and the beauty of nature, all while coming to grips with her past and her own identity. A Midwestern Gothic coming-of-age fable set along the riverbanks, Chicago musician-filmmaker Haroula Rose’s debut feature is an evocative marriage of Winter’s Bone and Huckleberry Finn. 90 min.

Live-streaming in China is a billion-dollar industry driven by everyday citizens hosting online shows and interacting with virtual audiences. Compiled from more than 800 hours of footage from marginalized streamers—a burn victim, a street dancer, a factory worker, and many others—Present.Perfect. crafts a revealing portrait of a community searching for human connection in a society that has left them behind. Mandarin with subtitles. 124 min.

Call it Hoop Dreams for boxing. Like its famous predecessor, Ringside isn’t just a story about two aspiring young Chicago black athletes as they experience the successes and setbacks of life and sport over several years. It also delivers an emotional gut-punch as it chronicles the travails of Destyne Butler Jr. and Kenneth Sims Jr., as well as the hardworking fathers who stand by their side through every victory and defeat. 95 min.

The Chicago International Film Festival Closing Night premiere of The Torch takes place at AMC River East 21 (322 E. Illinois) on Sunday, October 27, beginning at 6:00 p.m. with guest presentations, followed by the film presentation at 7:00 p.m. An After-Party with cocktails and hors d’oeuvres will follow at Steak 48, 615 N Wabash Ave, at 8:30 p.m. Film-only tickets start at $33 with VIP tickets (including film and after-party) at $75/ticket. Ticket and event information is available by calling (312) 332-3456 or at www.chicagofilmfestival.com http://www.chicagofilmfestival.com Tickets for Closing Night go on sale at noon on Thursday, September 23.