"The Compton Cowboys: The New Generation of Cowboys in America's Urban Heartland" by Walter Thompson-Hernández 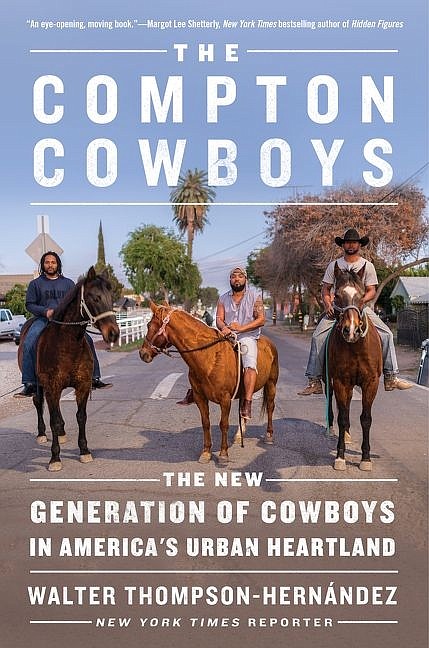 The guy with the white hat has a nice horse.

The guy with the white hat has rugged boots with spurs like stars on his heels. He wears crisp jeans, a starched shirt, a big belt buckle, and a bigger smile. The guy in the black has all those things, too, and more: in "The Compton Cowboys" by Walter Thompson-Hernández, the guy in the black hat also has black skin.

The memory had always stuck with him.

Many years ago, back when Thompson-Hernández was a boy growing up south of Los Angeles, being a Compton Cowboy was something lots of kids longed to be. It was that, or join a gang, and the choice was a lifeline for many, thanks to Mayisha Akbar.

Back then, after Akbar bought a ranch in a spot that few would even look for a ranch, after she became a Muslim and changed her name, she understood that if you put a kid on a horse, it has a way of changing that kid's life. If a kid had discipline and goals and maybe his or her own horse, well, that was even better because then two lives were changed. But her riders now were mostly adults, Akbar had health issues, and she was looking to pass the ranch on to her nephew.

It was a legacy that Randy didn't take lightly.

Decades ago, when Compton was still mostly rural, the ranch was set aside for Great Migrationers who might miss their farms back home. In its heyday, it was something; today, it sported stables filled with second-chance thoroughbreds and horse-auction refugees, houses for the hands, and riding areas surrounded incongruously by C-stores and high traffic. The Compton ranch wasn't the only place in the area for black cowboys to ride, but it was respected and it was up to Randy to keep it so.

That would be a battle: alcoholism and drug abuse plagued the riders, as did gangs, prison-time, bad pasts, and personality clashes. The children's program had few takers anymore and the ranch was technically up for sale. It was running out of time and money...

"The Compton Cowboys" is a nice surprise. It's also a source of disappointment.

For sure, readers will find themselves fascinated by a ranch in South Central, and itching to learn more about it, but facts here are frustratingly sparse. Yes, author Walter Thompson-Hernández follows the subtitled promise of focusing his book on the cowboys themselves, but a ranch in the middle of SoCal urbanity? It seems like a gift. Truly, more backstory on it would've been nice.

Instead, readers get a lot of throat-clearing and profile-rehashing that spins in place before it zooms off in a satisfying manner. Again, yes, that's the focus but less here absolutely would have been more.

In the end, "The Compton Cowboys" is good but it may leave a lingering feeling of Not Enough. For anyone needing a who-what-why, it requires a lot of fill-in-the-blanks and it saddles a reader with too many questions.