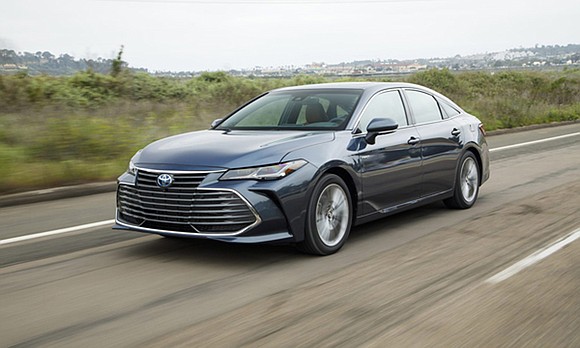 The 2020 Toyota Avalon was one smooth hybrid.

The sedan had surprising power, it handled effortlessly, and it had all the right creature comforts.

Couple that with two electric motor generators. One handles the generator, engine starter and charges the Nickle-Metal Hydride battery. The second generator drives the front wheels and handles regeneration during braking.

Combined, the Avalon’s hybrid system made 215 horsepower and it was mated to an electronic continuously variable transmission. This combination got 43 mpg across the board, in other words in the city, on the highway and combined.

There were two things at work: the first was the low-end torque added some oomph to the Avalon and the ECVT was pretty quiet. The only time we heard it was during aggressive acceleration and then we had to turn the audio system down.

This is the fifth generation of the Avalon and it was totally redesigned. In a phrase, the car is no longer a bulging unattractive hunk of model. The new iteration was long, low, wide, angular and sporty.

New stamping processes and a new platform allowed Toyota designers to sculpt sharper lines and angles, add deep draw panels, a distinct lower rocker panel behind the front wheels and even add door handles that coincide with its aggressive design.

They trimmed the Avalon. It was lower, the rear deck was shorter, the overhangs, front and rear, were reduced, the car was a bit wider and the wheelbase was increased by two inches. It made for a slick looking sedan.

Our test vehicle had slim all-LED projector headlights. There was the intersection of three-dimensional surfaces and assorted functions. The aluminum hood’s longitudinal lines and lightweight build; the wide grille and tangential vents at the Avalon’s lower portion were crafted for the effective direction of passing air across the front tires and along the flanks.

Simple horizontal character lines sliced across the backside, at the top, center, and lower portions of the Avalon. Connected LED taillamps were shaped in a three-dimensional, “aero fin” style. They integrated backup, stop, and turn lights into a single form.

And Toyota worked its design and engineering skill inside the Avalon too. They extended the rear cabin by seven inches. That’s a lot in the automotive universe. When we sat in the back seat it felt overtly comfortable and spacious. What’s more, it had two USB jacks back there, the car had five in all, and heated rear seats.

The front passenger compartment was dominated by the infotainment touch screen. It looked like it was made from a slab of black granite. Toyota was able to keep it simple by putting some controls like the heated steering wheel, the camera, trunk release and fuel door left of the steering wheel on the dash.

They did a great job of making the digital instruments look like they were analogue. They did it by putting the speedometer and the power and recharging meter inside two permanent and probably plastic circles in front of the driver. Then they put what looked like an independent TFT screen between them. It was all in black and reversed out in white lettering and numerals.

The front seats were heated and cooled. The door panels had quilted leather like material. And the Avalon had drive modes: EV, sport and normal. But all was not perfect. We thought the Avalon’s front doors sounded kind of flimsy when they were swung shut. We tried the back doors and they both sounded solid upon closing.

And though mileage was outstanding, we were a bit surprised that the 2020 Avalon Hybrid had 13.2-gallon fuel tank. Then it dawned on us that the battery had to go someplace.

The 2020 Toyota Avalon Hybrid was a nicely done sporty looking coupe like sedan for $45,489.