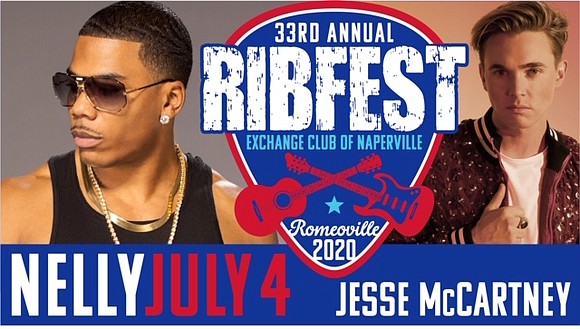 Fireworks, fireworks and more fireworks, of the musical and lights variety, are on tap for 4th of July at the Exchange Club of Naperville’s Ribfest, now located in Romeoville. Jesse McCartney will perform before the annual fireworks display on the 4th, and Nelly will perform after. “It’s literally going to be a star-studded night,” states Mary Howenstine, director of marketing and PR for Ribfest. “From Jesse McCartney to the fireworks to Nelly, Ribfest is going to light up the park with stars and excitement and outstanding music on the 4th.” Tickets are already on sale for the event. “One general admission ticket includes both concerts and optimal viewing for the fireworks display,” says Howenstine. “By moving the performances on the Navistar Main Stage into the evening hours, separated by fireworks, patrons can enjoy parades and picnics during the day, and still not miss a thing at Ribfest on the 4th.” Other announced headliners for Ribfest 2020 are July 2nd REO and STYX with Head East.

Singer-songwriter Jesse McCartney has had the kind of career that most young artists dream for themselves. Ask the New York-born artist to recall some of the highlights and he’ll tell you about performing for two U.S. presidents (Barack Obama and George W. Bush), playing to thousands of devoted fans in Tokyo (where he watched the non-English-speaking audience sing along to every word), and meeting his musical heroes Stevie Wonder and Craig David.

All that was done before the release of his 2018 single “Better With You,” his first new music since In Technicolor, his well-received 2014 album (among SPIN’s top 20 pop albums). The success thus far has helped McCartney reconnect with a feeling that he hadn’t had before with his music: the freedom to write as he wishes, everything from his perspective.

The turning point from boy band pop star to serious working artist began when McCartney co-wrote the Grammy Award- winning single “Bleeding Love” with Ryan Tedder, performed by Leona Lewis. An international mega-hit, “Bleeding Love” was Grammy-nominated for Record of the Year, reached No.1 in 35 countries, and became the best-selling single of 2008 worldwide. It has racked 365M streams on Spotify.

He’s excited that his fans have come along for the ride with his singles “Better With You” and “Wasted”, released in 2018. “It’s nice to be able to talk about things that the fans are also going through,” he says. “I think they feel connected to me because we did basically grow up together. When I was 16, they were in high school with braces on just like me, and now here we are; they’re playing my song at their wedding.

In 2019 after touring the US and Asia, Jesse is now back in the studio working on a new project. “At this point in my life everything feels like it’s clicking into place. I’m looking forward a whole new stage.”

July 2nd and July 4th tickets are on sale now through ribfest.net.

Exchange Club of Naperville and Ribfest

Exchange, America’s Service Club, is a group of men and women working together to make our communities better places to live through programs of service in Americanism, Community Service, Youth Activities, and its national program—the Prevention of Child Abuse. Exchange Club of Naperville chartered in 1987. Mission-driven and volunteer run, Exchange Club of Naperville’s Ribfest is a premier Midwestern 4th of July concert series and celebration. Ribfest, in its 33rd year, now draws more than 150,000 visitors annually. In 2020, the venue has a new home: Romeoville, Illinois. Net proceeds from Ribfest directly support 50+ agencies that work tirelessly to eliminate child abuse and domestic violence in all forms. To date, Exchange has donated over $18 million to these agencies.